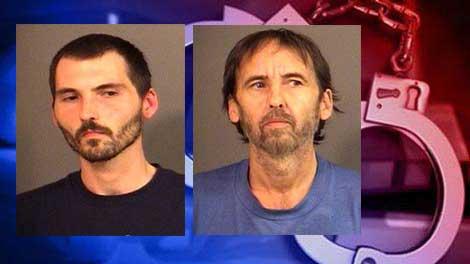 A man and his father were arrested for allegedly tying up and confining the son's girlfriend in the basement of her home. The victim escaped after several days and called police.

On September 13 at 2:39 p.m., officers with the South Bend Police Department were called to S. Twyckenham in South Bend to investigate an assault.

When officers arrived, they located the victim outside and said she appeared upset and afraid.

She had bruising and dried blood on her face and her left eye was swelling shut.

She told police she had been trapped at a home on E. Ruskin by her boyfriend, Shawn Galloway and his father, Christopher Galloway.

She told police she had been tied up in the basement and got away when Shawn went to work and Christopher slept.

She said she had been confined to the basement for two days and had been bound with electrical cords and shoelaces.

Police went into the home and found Christopher asleep in the house.

In the house, officers found a pair of shoes with no shoelaces and a loose electrical cord near the basement, according to the probable cause affidavit.

Also in the basement, officers say they found women's clothing, a jar with a dark yellow liquid inside and a bucket with human waste.

Christopher denied having anything to do with the victim's injuries or her confinement, reports said.

Officers located Shawn at his place of work and he refused to speak to officers. He was placed under arrest.

Investigators went to the hospital to speak with the victim further. She was calmer and gave them additional details.

She said on September 10 she was at home around 4 p.m. when Shawn pulled her to the ground by her hair and Christopher helped push her down. She told police Shawn began punching her and smashed her head into the ground causing severe pain, reports said.

Shawn then allegedly grabbed electrical wire and tied her hands in front of her body and took her to the basement, according to the probable cause affidavit.

The victim untied herself while Shawn was away, so he returned and tied her hands behind her back, then tied her hands to her leg with shoelaces, according to police.

Officers noted the victim had a prosthetic right leg from the knee down.

The victim told police she didn't receive any water or food and had to "mess herself."

The victim said Shawn told her she would stay in the basement until she "learned her lesson."

On Sunday, Shawn allowed the victim to smoke a cigarette. She asked him to untie her and she said she wouldn't call police, reports said.

Shawn allegedly untied her and apologized, then went to work.

The victim says Shawn left, then she waited for Christopher to fall asleep before she left the house.

The victim also told police she gets locked in the basement at least once a week, according to the probable cause affidavit.

The probable cause affidavit says the victim was tied up because Shawn was "punishing" her for "partying" and for threatening to call police after an earlier assault.

The prosecutor's office asked for higher than standard bond because she is at risk for further violence and asked for GPS monitoring if Shawn posts bond.

Christopher Galloway has been charged with aiding, inducing or causing criminal confinement and battery resulting in serious bodily injury.

Shawn Galloway has been charged with criminal confinement and battery resulting in serious bodily injury.