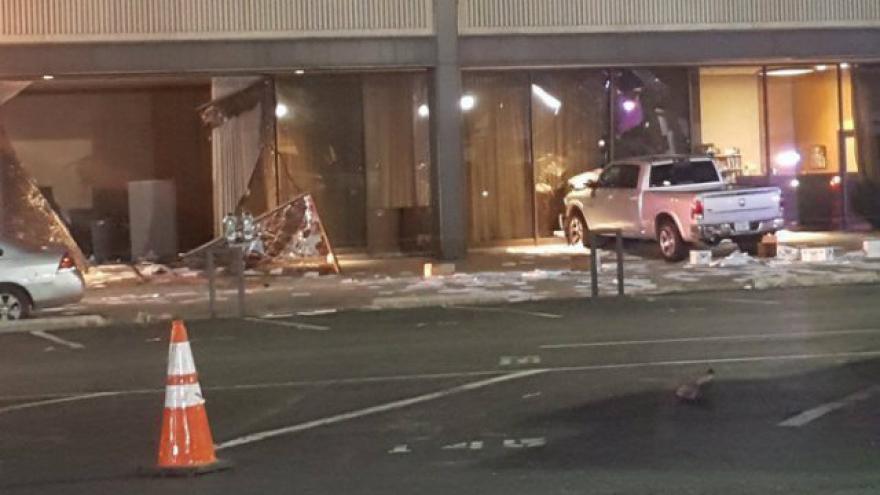 A man reportedly crashed his pickup truck into the Dallas TV news station Wednesday in an apparent attempt to draw attention to the fatal shooting of an aquaintance in 2012. Photo courtesy @scrmblnscholar/Twitter

DALLAS (AP) — A ranting man repeatedly rammed his pickup truck into the Fox television affiliate's building in downtown Dallas on Wednesday in an apparent attempt to draw attention to the fatal shooting of an acquaintance by a sheriff's deputy in 2012, authorities said.

Michael Chadwick Fry, 34, repeatedly crashed into the large windows near the entrance of the building that houses KDFW at around 6 a.m., smashing several of them. The truck hit an unoccupied administrative side of the building before office workers arrived for the day, and no one inside the building was hurt.

After ramming the building for the final time, the man "jumped out and started ranting," KDFW said in a statement. He wasn't able to get inside the building.

Reporter Brandon Todd said the man was yelling about "high treason," and that he believed he had clearly been wronged and that someone was trying to kill him.

"I didn't want him to get angry," Todd said. At one point, the man pulled an orange duffel bag out of the truck. Onlookers began to back away and there were concerns he had a bomb, Todd said. He said the man was crying when he was taken into custody.

During the episode, Fry also scattered papers that had information about an officer-involved shooting. Police Major Max Geron reported on social media that Fry had "mental issues" and wanted to bring media attention to the 2012 fatal shooting of an acquaintance, Roberto Hernandez, by a sheriff's deputy in Denton County, northwest of Dallas. Authorities say the deputy shot and killed Hernandez after he rammed a patrol vehicle, and that Fry was in the car with Hernandez at the time.

One of the scattered papers shows handwritten notes on an article about the 2012 shooting. Part of the notes said "They tryed (sic) to kill me. And they missed. And hit him."

Fry was evaluated at a hospital Wednesday before being booked into the Dallas County jail on a criminal mischief charge. While being escorted into the jail, he told WFAA that he was "mentally challenged" and had been "running for (his) life" since the shooting.

Denton County records show Fry has been booked into jail more than two dozen times since 2003 on a variety of charges, including public intoxication and arson.

There were initial fears that Fry might have been targeting workers at the TV station, but authorities say that doesn't appear to be the case. The crash comes amid increased security concerns in newsrooms across the country after five employees at the Capital Gazette newspaper in Annapolis, Maryland were killed by a shooter with a long-running grudge against the newspaper.

A Los Angeles man was arrested last week on charges he threatened to kill journalists from The Boston Globe, according to federal prosecutors. They said the man called the newspaper's journalists an "enemy of the people."