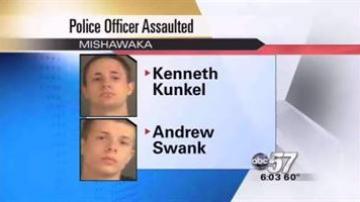 MISHAWAKA, Ind. -- A Mishawaka police officer is recovering after a teen attacked and pistol-whipped him Tuesday night.

Police say they received a call of suspicious teens looking into garages from a neighbor around 10 p.m. near the 600 block of South Main Street.

Police say Fox, one of the responding officers, was then assaulted in the alley between 6th and 7th Streets.

19-year-old Kenneth Kunkel is behind bars, along with 19-year-old Andrew Swank. Both teens now face multiple charges including resisting law enforcement, felon in the possession of a firearm and carrying a concealed weapon.

In addition, Kunkel also faces a charge for aggravated battery of a police officer with a deadly weapon after Police say Kunkel hit Sgt. Bryan Fox several times in the head with a gun when the officer tried to arrest him.

Swank ran off when police tried to taken him into custody, but he was later tracked down by one of Mishawaka's K9 units. Swank was then taken to the hospital and treated for a dog bite before finally being booking in at the St. Joseph County Jail.

ABC 57 talked to Dion Collins, the neighbor that called 911 and learned that he man knew the officer who was attacked.

Collins and his family were at home in their kitchen when they heard a group of rowdy teens walking down the alley behind their house.

"I had about 11 gentlemen walking down my alley and we over heard them talking about how they wanted to break out my windows in my house and vehicle so I called the Mishawaka police, said Collins."

Moments later, Collins said four police officers showed up to his house and talked to him before setting off to search for the teens.

Curious if police had caught up to young men, Collins walked to the end of the street and that is when he ran in to Fox was working bike patrol at the time.

What Collins did not know was that minutes later Fox ran into two of the teens and confront them.

That is when police say Kunkel attacked Fox, hitting him several times in the head before pulling out a gun and pistol-whipping him.

Collins said he is glad police caught them, but is more upset that teens in the area seem to be getting more violent everyday.

"Where are they getting these weapons, where are they coming from? Do they have the proper up bringing? I don't know what it is, but it's just unbelievable, said Collins."