Police officer deaths from guns up 72 percent from July 2015 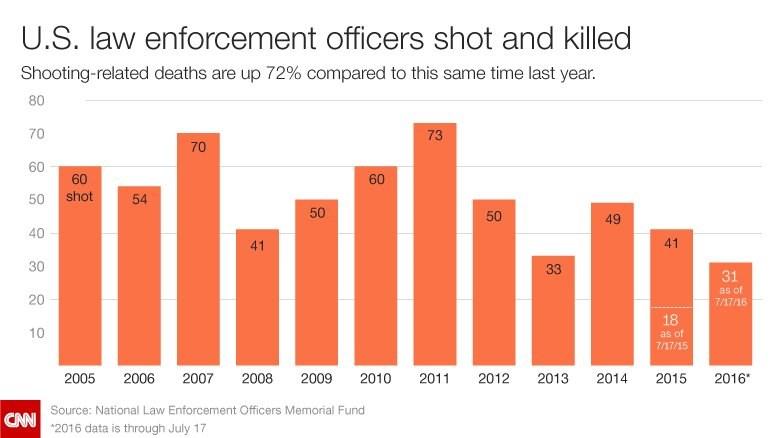 (CNN) -- The shooting deaths of three officers in Baton Rouge, Louisiana, on Sunday pushed the number of law enforcement fatalities past a tragic benchmark.

As of Sunday, 31 law enforcement officers were shot to death in the United States, according to the National Law Enforcement Officers Memorial Fund, which keeps data on officers killed on the job.

Just as activists across the country have said the men's deaths are part of a bigger problem, National Law Enforcement Officers Memorial Fund spokesman Steve Groeninger said the officers' deaths point to a rapidly escalating trend. Annual rates of shooting deaths of law enforcement officers have fluctuated over the past decade, but they had begun to decline steadily in 2014.

"It's very concerning to see that firearms are responsible for more law enforcement fatalities today than this time last year," Groeninger said.

"The events in Louisiana today and Dallas last week and other events show that there are those who are apparently targeting law enforcement because of the uniform they wear or the role they play, and it's very troubling."

In total, firearms were responsible for 41 of 123 officer fatalities in 2015, according to the officers memorial fund, but it was not the No. 1 cause of death.

So far in 2016, however, gun-related deaths are the leading cause of fatalities, according to the data, followed by 24 traffic-related fatalities and 8 in the "other" category.