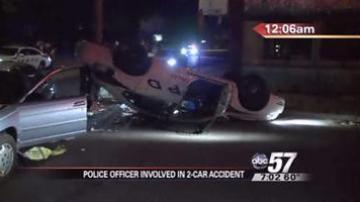 SOUTH BEND, Ind. -- According to investigators, South Bend police officer Corporal Jeff McKee was going the wrong way on a one-way street on his way to a medical call.

He was involved in a crash that caused his squad car to overturn.

It happened around midnight at Huron and Brookfield on the city's west side.

McKee was rushed to Memorial Hospital and was later released with non-life threatening injuries.

Two women in the other car refused medical treatment on the scene.

ABC 57'S Eric Steltzer obtained the crash report. No where in it does it say that the officer had his lights or sirens on while driving the wrong way down a one way street.

"It's not one of the fun calls you get. When I was told there was a police officer involved. The first question I asked was, 'Is he ok?'" said Sergeant Bill Kraus.

Corporal McKee only had minor injuries and was released from the hospital Saturday morning. The 18-year-old female driver and her female passenger were not seriously hurt, but the impact was great enough to flip the corporal's car.

The question many are now asking now, is whether or not it is ever alright to break the law, even if you have a badge.

"It's definitely important to be safe, but at the same time he's trying to do his job to help someone," said Dan Griess.

"It sucks, and people can get hurt, and I feel justice won't be prevailed anyway," said Michael Davis.

On Saturday, South Bend Mayor Pete Buttigieg said the police department will conduct an investigation. He said events like this can be circumstantial.

"Sometimes it's a little different when an officer is responding, but there are still rules, and the police are still gathering information," said Buttigieg.

Corporal McKee told police that he didn't remember what happened. A sergeant on the scene said there were no witnesses, only people who heard the crash. Police said no alcohol or drugs were involved.

There are a lot of maybes with this story that we are still trying to get answers to.

Police haven't told us if his lights were on, and exactly why this officer felt the need to drive the wrong way on a one-way street.

We'll continue to follow this story and have updates for you on air and online.