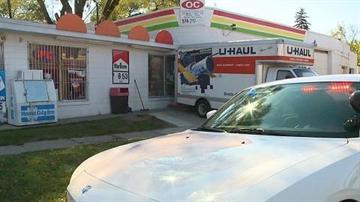 The raid is the result of months of investigation spurred by community complaints about the store and the people who frequent it.

During the execution of a search warrant, investigators found the evidence they were looking for and arrested the owner, Ebrahim Almalbeh, on two counts of dealing prescription drugs.

Police say, Almalbeh sold individual Viagra pills over the counter to people without a prescription for them. The store also allegedly sold cigarettes illegally, outside of packs, and counterfeit clothing and shoes.

Complaints about the store picked up after the murder of 19-year-old Steven Chatman, on August 18, 2011, as he left the store. Many complaints were about groups of teens gathering in the store’s parking lot at all hours of the day and night.

Many people had a positive reaction when they were told why the police were at the store, saying phrases such as, “it’s about time,” and “it took them long enough.”

However, not everyone was pleased by the raid and its results. Several neighbors living on Pratt, just down the street from the store tried to defend Almalbeh as best they could.

Nearly everyone who talked to ABC 57 could not deny that Almalbeh was a kind and generous man. Many shared stories of the compassion he has had for them and their plights.

Stephanie Turner was brought to tears when Almalbeh was brought out of the store in handcuffs. She says, he is like a father to her. “He helps me pay my bills when I was unemployed; helped me with food. [My home] was broken into three times. Police haven’t done anything about it or caught anybody. My dog was shot. I had to pay $1000 to get her fixed, nobody was caught. He has done more for me and my family than anybody,” said Turner.

Still, and in spite of her strong emotional attachment to Almalbeh, she recognizes he may have broken the law. “I understand that it was illegal, but this is not a big crime. We have more crime and corruption in this city that needs to be worried about than somebody selling a Viagra pill,” said Turner.

The police obviously don’t see it that way. “There’s a right way and a wrong way to run a business. And I mean, on a lot of different levels and a lot of different ways, they were not going about this the correct way,” said Captain Phil Trent with the South Bend Police Department.

For many, the raid was a long time coming, especially after numerous warnings by the police department to change their ways. The store has been cited three times in the last few years according to Trent, most recently by the state for selling cigarettes to minors.

Trent also says this was just the beginning. There are other operations, similar to this one, looking into allegations of illegal activity at other South Bend convenience stores.