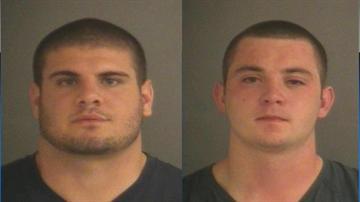 Police said 19 year-old quarterback Tommy Rees and 21 year-old inside linebacker Carlo Calabrese were at a party in the backyard of a home on Notre Dame Avenue.

Police said they got a noise complaint. When they arrived at they home officers walked around back and they heard a loud sound.

"They heard a cracking sound in the back of the property as if someone was climbing a wooden fence and the fence boards were cracking," said South Bend Police Captain Phil Trent.

Police said a group of five people fled when officers arrived and officers chased them, including Rees who ran.

"They chased around some of the other adjoining properties, never in one straight direction," said Trent.

Police eventually caught up with Rees in the middle of Notre Dame Avenue. Police said Rees continued to resist arrest and Rees kneed the officer in the stomach.

"He gave him a knee to his midsection, knocked the wind out of him and then the two went down onto the pavement where the officer sustained an injury to his right arm," said Trent.

At this point the officer sprayed Rees with pepper spray and arrested him.

This is when Calabrese stepped in to defend his teammate.

"He asks our officers, if we know who he is, what his position is at the university on the football team and so forth," said Trent.

This is when police said Calabrese threatened them.

"The threat is ‘My people are going to get you,’ "said Trent.

Police said a group of onlookers were standing along the sidewalk, and some of them grabbed Calabrese and pulled him away.

"Mr. Calabrese started push and shoving the members of the crowd that had gathered there and they heard him reiterate that threat towards the officers, that’s when Mr. Calabrese was arrested," said Trent.

Calabrese bonded out around 3:30 a.m. on Thursday and is facing disorderly conduct charges.

Rees bonded out around 5 p.m. on Thursday. He’s charged with four misdemeanors including one count of a minor consuming alcohol, two counts of resisting arrest, and one count of battery.