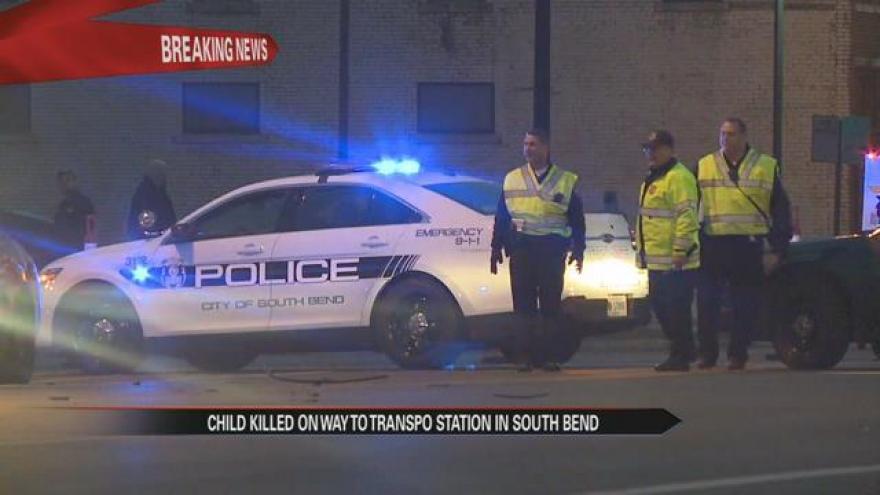 South Bend Police have confirmed that an 11-year-old was struck and killed by a vehicle Monday morning.

Investigators say it happened on Michigan Street near the TRANSPO station.

Officers say 11-year-old Tristian Moore, his 8-year-old brother, and another child were crossing Michigan when a pickup truck struck Tristian.

Tristian was taken to the hospital where he died.

Tristian was a student at Success Academy in South Bend.

Michigan Street was closed from Bronson to South for several hours during the investigation.

“My heart broke, too know that an 11-year-old boy’s life was taken for no reason at all, when it could have been prevented. It’s really sad,” Nicole Little said.

Little walks the same path Tristian was taking, every day.

“There’s a lot of jaywalking. I mean, people cross the streets back and forth,” Little said

Pedestrian Janet Schoenfeld says she sees it too.

“A lot of people take the bus back and forth and walk through here and you have to, you know, since it’s the two-way street now a lot of people don’t know that,” Schoenfeld said.

Not only is Michigan now a two way street, but the traffic signals at the South Street intersection, including the crosswalk, have been out for months.

“I think that’s the main problem, that this traffic light should have never came out, because there’s a lot of people that cross right here,” Little said.

Police themselves say the street changes factor into their investigation.

“You have two directions of traffic. Also the traffic signal here has been removed or shut down for that same reason,” Lt. Gene Eyster, with South Bend Police said.

The FACT team also interviewed witnesses including the driver and Tristian’s little brother.

Now as a family mourns the loss of a child, police and community members are searching for answers, and perhaps solutions.

“Get the lights done, get things fixed around here so we don’t lose any innocent children’s lives,” Little said.

The City of South Bend issued the following statement:

The City's deepest condolences and prayers go out to the family of the child struck and killed by a vehicle at South Street this morning. We are all grieving this tragic loss in our community.

The circumstances of today’s accident are still under active investigation. The Mayor has requested that a review of information about the incident, and the conditions at the intersection where it took place, be presented to him by the end of the day.

The City has received inquiries today about changes to traffic signals at the intersection where the incident occurred. The intersection was part of a traffic study in 2015 which recommended the removal of a then-existing traffic signal based on vehicle and pedestrian counts. The signal was subsequently deactivated pending further review.