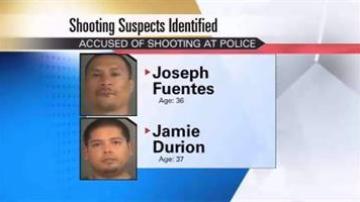 SOUTH BEND, Ind. -- The names of two men arrested for a shooting on South Bend's westside Tuesday have been released.

Police arrested Joseph Fuentes and Jamie Durion. No charges have been filed.

Officers believe they played a role in a chase and shots fired at officers in the area of Ford and Brookfield Streets on Tuesday afternoon.