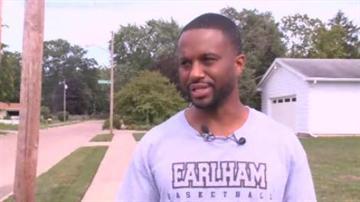 "You know like I said it was a bit odd, the conversation was very strange," said Henry Davis Jr., South Bend Common Council, 2nd district.

A strange phone call from a stranger, but the person wasn't calling to suggest a new city ordinance.

"The person began to scream expletives at me and tell me that they were gonna obviously murder me or kill me."

Davis said he simply asked the caller "why?"

"The individual called me a snitch and I still don't know what that means as far as me being a snitch and being an elected official."

In a letter to the Chief of Police Ronald Teachman, the councilman addressed "the recent death threat called into my phone" saying "I am in fear of my life and I feel unsafe." The letter also requests police protection.

"The request was made from the patrol division to make extra patrols," said Phil Trent, South Bend Police Department.

He won't get an armed officer sitting in the driveway though. Police say these threats are common and despite Davis' public position with the city, he's no different than all the other victims.

"Assigning an officer to each and every one of those people- I mean just in your head do the math- it's just absolutely overwhelming," said Trent.

Police continue to investigate the threat like they do with all victims. Until then, the advice is the same for everyone.