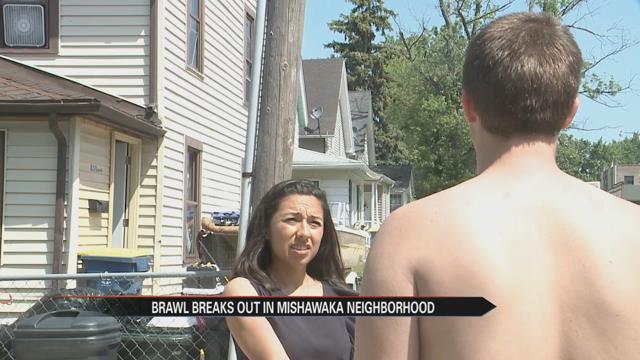 Mishawaka Police were called to the 800 block of N. Division because of a large fight involving about a dozen people just before 9 a.m. Thursday.

A man, who had family members involved in the brawl and did not want to be identified, said his family was wrongly targeted.

“Three white males I don't know where they came from but they had a minivan and they assumed that we robbed them last night and we were all night fishing so no,” said the man.

Lieutenant Tim Williams of the Mishawaka Police Department said they received 911 calls about the brawl.

“With it happening at 8:53 in the morning, your neighbors are usually quiet that early,” said Williams.

When police arrived they learned two males had fled from the scene and were followed by two pit bulls.

According to police, one of the men was bleeding.

Residents were woken up by the three men who allegedly started the fight. They were not alone.

“Along with two pit bulls and one of them may have been armed with a handgun,” said Williams.

“My dad ended up getting pistol whipped twice. My little brothers got a broken hand and the other one I think he got shot,” said the man whose relative was involved in the fight.

Lieutenant Williams says two men were taken into custody but have not been formally charged.

A gun was recovered from the scene of the brawl.

The pit bulls were returned to family members unharmed.

Anyone who witnessed the fight is asked to contact the Mishawaka Police Detective Bureau at 574-258-1684.