Police rethinking strategy due to increase in shootings 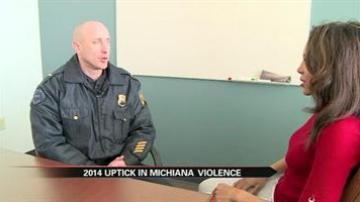 SOUTH BEND, Ind. -- Last year between January and April, 8 people were shot in South Bend. In that same time this year, 29 people have been shot. Now police are headed back to the drawing board to fight the increase in violence.

"With the shootings we've been having, maybe some of our strategies aren't working," said Lieutenant Dan Skibens, Commander of the Street Crimes Unit of the South Bend Police Department.

Nathan Hill, who was shot and killed early Wednesday morning, was the 29th person shot so far this year.

Violence is out of control and now even police are facing a new reality.

"It is a lot more work for us so we need to step up our game," said Skibens.

Skibens says they need to go back to the drawing board.

"We have to look at how we can have a better strategy to hopefully prevent some of these from happening," said Skibens.

Skibens says the street crimes unit is constantly studying the patterns of crimes and keeping a close eye on people who've been in trouble in the past.

"We have a few groups identified that have committed a majority of the violent crimes throughout our city," said Skibens.

For police, the key is to be two steps ahead of the criminals-

"For us in street crimes that is our primary focus," said Skibens.

"Focusing on the right individuals, warrants or whatever the case may be, get them off the streets so they are not committing those crimes," said Skibens.