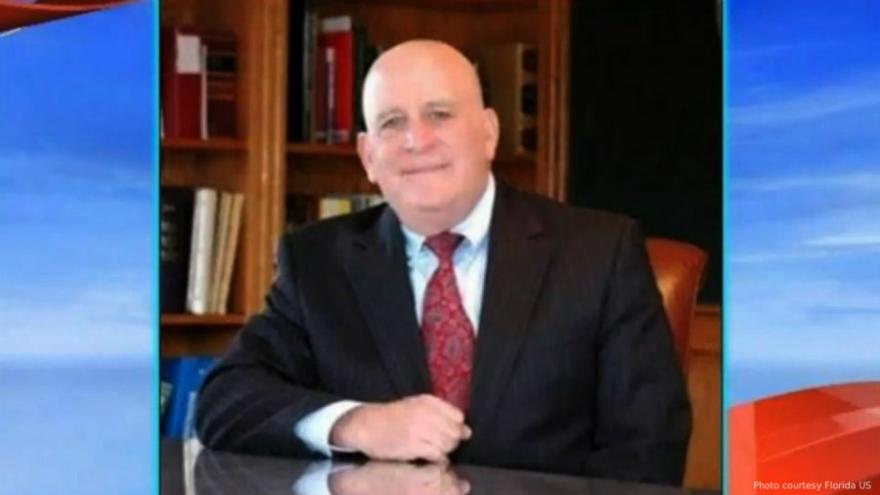 (CNN) -- A murder investigation in a peaceful golf community in Palm Beach Gardens, Florida, has come to a bizarre conclusion.

Now, police say a 71-year-old man who was found shot to death in the community in late January wasn't killed at all. He actually killed himself -- in a very unusual way.

The puzzling investigation into Alan Abrahamson's death started six months ago as a homicide. Palm Beach Gardens, a city of about 50,000, is praised by local police as one of the safest places in the state.

A crime like this would be shocking for anyone who lives in Palm Beach Gardens. It was especially odd for Abrahamson's family and friends, who said the man they knew wasn't in any trouble.

He didn't have any known enemies. He and his wife were "soul mates," and he was "somebody everybody would gravitate to," a friend told police.

"Alan was an avid golfer, enjoyed traveling and had a zest for life. He was known for his extraordinary smile, contagious laugh and the twinkle in his eyes," reads his obituary published in the Palm Beach Post.

But something wasn't adding up. Police would soon find out what.

Linda Abrahamson told police her husband was probably going to meet his friend at Starbucks the morning he died, according to a Palm Beach Gardens police report. It had become a recent routine of his: taking morning strolls to the nearby shopping center for coffee.

That January day was no exception, she said.

The police report, made public last week, details the following account of his last day and the investigation that followed:

At 5:42 a.m. on January 25, Abrahamson left his house wearing shorts, a royal blue sweatshirt and a ball cap.

Minutes later, he reached the gated community's north entrance. At 5:53 a.m., he walked out of the security camera's sight. Thirty-seven minutes later, a single gunshot can be heard on the surveillance video.

The next to spot him would be a dog, who jumped off a golf cart and found Abrahamson around 7 a.m. He was lying on his back in a field near the gate, with a hole in his sweatshirt surrounded by blood.

By 9:30 a.m., detectives were on the scene. They found Abrahamson's phone and wallet in his pocket, along with a pair of scissors. But they didn't find the watch he normally wore, or the hundreds of dollars he was known to carry, or the gun that shot him.

They also didn't find any sign of a struggle. An autopsy showed only one hole and one bullet, which had mushroomed into six points when it entered his body, hitting his heart and lungs and breaking a rib, the report says.

The incident was ruled a homicide, and the investigation was on.

A week after finding the body, police still didn't know what had happened.

They interviewed Abrahamson's wife, his two children and his friends. They walked around the country club looking for clues or evidence, like the missing gun or the casing of the bullet that pierced his chest.

They didn't find them. What they did find on his computer was a little more interesting.

In his email inbox, police saw a message about an order Abrahamson placed less than a month before he died -- for a $55 weather balloon.

And on January 23, police found, he went to an industrial gas store in West Palm Beach and left with a helium tank.

But Abrahamson didn't have any hobbies that used those tools, his family and friend told police.

CNN has reached out to Abrahamson's family for comment but has not received a response.

There was another piece to the puzzle authorities couldn't explain. According to surveillance video, Abrahamson walked past the gatehouse 37 minutes before the gunshot was heard, but he hadn't left the country club area.

A detective had walked the route from the gatehouse to where the body was found on the sidewalk. It only took him 4 minutes.

What was Abrahamson doing for the other 30-so minutes?

Then detective Bryan Broehm had a wild idea: Maybe the whole thing was a suicide.

How would it work? If Abrahamson had tied a gun to a weather balloon, it would have disappeared into the sky once he shot himself, a detective wrote in the report.

"Although the theory seemed far-fetched, it was plausible," the report said.

So, the research continued until detectives stumbled upon a similar incident -- in a 2003 "CSI: Las Vegas" episode. A character had tied a gun to helium-filled balloons to stage a homicide.

But after making some calls, no one said they'd seen a weather balloon on January 25.

Instead, police looked to Abrahamson's Google history for answers. They found them in a trove of searches trailing at least 10 years back.

Most life insurance policies have a suicide clause, which says a death benefit won't be paid if the insured person kills themselves within two years of taking out a policy.

By August 2017, his focus had narrowed. He wrote, "How many cubic feet of helium do you need to raise one pound?"

On January 23, he looked for nearby helium suppliers.

The pieces finally fit together, and to investigators the picture became clear: Abrahamson wasn't murdered.

"To be honest with you, it's just a bizarre situation," psychologist Raphi Wald told CNN affiliate WPEC. "I mean the word that comes to mind is just bizarre."

On March 5, detectives met with the State Attorney's Office and showed what they found.

"We informed them through our investigation that it was a suicide made to look like a homicide," the report said.