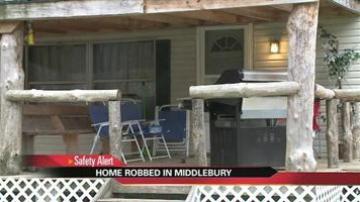 MIDDLEBURY, Ind.- Police are searching for two men who are accused of breaking into a mother's home while she was getting her 3 children ready for school.

Neighbors who live right across the street from where this happened said they didn't hear or see anything except dogs barking.

Most neigborhoods have similar sounds. A car driving by, or a lawn being mowed, but on the 1200 block of Pine Cone Drive, it's the noises neighbors didn't hear that police are worried about.

“I didn’t see anything that went on. I didn’t hear nothing," said Lou Lambert, a neighbor.

“We didn’t see any cars. We didn’t see anything unusual," said neighbor Jennifer Baker. "The next thing you know, I’m up at 6:30 getting the kids on the bus and still nothing across the street.”

The silence of the crime still has neighbors on edge. Police say, around 6:00 this morning, two men broke into a home wearing masks trying to rob the place.

"What's alarming about this is that we had two men that entered into the home, forced their way into the home, there was a mother there alone with her children," said Captain Jim Bradberry with the Elkhart Sheriff's Department. "So once they got into the home, they ended up leaving with property that didn't belong to them. There was money taken along with some jewelry."

Captain Bradberry wants to give this young family of 5 justice. He's asking Michiana to help catch the culprits. So far, they've canvassed the neighborhood but officers haven't found anything.

“This really scares us over here,” said Baker.

Neighbors said this level of crime is a shock to them. Especially since they're all so close.

“We’re all kind of like a little family over here. We watch out for everyone. If there’s something down the road, or whoever is around, we’re just always watching out,” said Baker.

Neighbors say they will keep a watchful eye on what happens for the next few days.

“I can guarantee that a lot of families are going to take this and train their kids on what to do next,” said Baker.