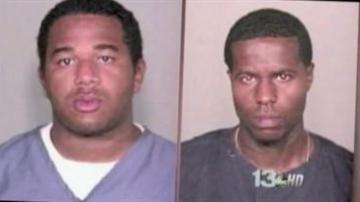 ORANGE COUNTY, Fla. -- Police in Orange County Florida are promising to make more arrests of whoever helped two convicts walk out of prison.

The two escapees were the center of a nationwide man hunt until they were captured just 100 miles away from the prison.

Police say they arrived just in time. The two were waiting for a ride to take them out of state.

"We are backtracking to those who helped carry out this fraud and we will be looking closely at anyone who may have helped harbor these fugitives," said Officer Gerald Bailey.

Investigators are now looking into their prison accounts where friends on the outside can make deposits.

They have ruled out family members as suspects. It appears they were tricked like everyone else.