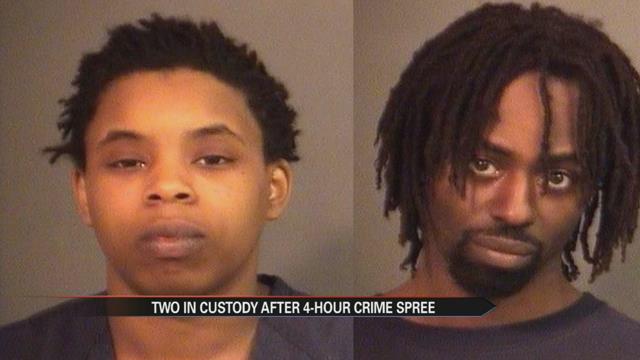 The third suspect is at large.

Wednesday night, the crimes started at 9:41 pm when police say the home of a family was nearly robbed on Randolph street.

The suspects fired several shots at the home with long guns.

They didn’t manage to get inside or harm the family, but it wasn’t long until police were called again.

Just after midnight Thursday, police say similar suspects robbed this Candlewood Suites on Lincolnway West and then took off.

About 20 minutes after that, police were dispatched to a robbery on Calhoun street.

They say a pedestrian that was robbed at gunpoint, by three suspects driving in a car.

At 1:13 am, and police were called to Leland Avenue.

A new victim said he was robbed while parking his vehicle, by a black male suspect with a long gun.

He also reported seeing the suspects moments before at the Citgo gas station on Lincolnway West.

At 1:29 am, an officer on duty at the 1000 block of Diamond Avenue says he began witnessing a car theft in progress.

The officer says one suspect jumped in the victim’s car and took off, one ran away on foot and the other left in their original car.

Moments later, police caught up with two of the suspects, both Benton Harbor residents, Jerricka Johnson and Marcus Edwards,

Johnson and Edwards are each charged with four counts of robbery, one count of attempted robbery and one count of intimidation.

Edwards is also charged with unlawful possession of a firearm.

Police are still searching for the third suspect in this crime spree.

They have collected the vehicle and guns as evidence.