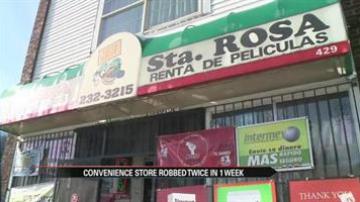 SOUTH BEND, Ind. -- South Bend Police are searching for a man who pulled a gun and robbed a grocery store Friday morning. Police say they've seen an increase in robberies lately and the owners of Tienda Santa Rosa say they've been targeted twice this week.

"It's my family on the line. And it's just one of those days when someone wants to be stupid and point a gun at somebody else," said Jose Ortiz.

Around 11:30 a.m. a man walked into the convenience store on South Walnut Street, pointed a gun at Ximena Ortiz and demanded money.

"I was in shock. I just wanted to give them the money so he can leave. Afterwards that's when I got nervous when I realized what happened," said Ximena.

The masked gunman only got away with about $40.

"What are you going to do with $40 for the holidays? Honestly," said Jose. "It's messed up because they may be doing it for their own reason but they are taking someone else's chance at a good Christmas."

Jose was extremely upset when he got the call that someone had pointed a gun at his 20 year old cousin- Ximena.

"I'm really upset when they point a gun at my family when they're doing their job and trying to support themselves. It just kind of hurts," said Jose.

Jose says the first robbery happened on Sunday and the suspect took the entire cash register. They chased him and then he dropped it.

Jose says he is worried that they will come back again with a gun.

South Bend Police said they've seen an increase in armed robberies lately, and they've been working all day to identify various suspects across the city.

"We've seen individuals who once they target a specific type of business, they'll go into the business they'll rob it successfully and come back a week, two weeks, a month, or a year later and re-rob it," said Captain Phil Trent of the South Bend Police Department.

Police say the suspect was wearing a grey Aeropostale hoodie with a black shirt underneath.