Police shoot at suspect who tried to run over officers 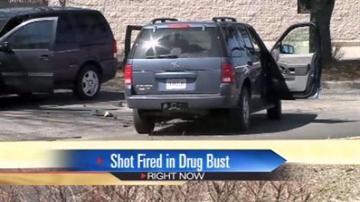 SOUTH BEND, Ind. -- South Bend Police Officers shot at a suspect who rammed a police car and attempted to run over police officers in an attempt to flee, according to police.

It happened during a drug bust Tuesday afternoon.

"They were going to do a deal with an individual,” said Captain Phil Trent of the South Bend Police Department.

The Narcotics Enforcement Unit planned the takedown for the parking lot at the southwest corner of Western Avenue and Mayflower Road.

"Very rarely do they happen at clandestine locations, a lot of times these happen in public places,” said Trent.

Public places add a level of danger to any operation, so officers have to be hyper-alert to protecting innocent bystanders because anything can happen.

"Our suspect in this case entered a vehicle, attempted to run over some of our officers as well as ram some vehicles in the parking lot to try to flee,” said Trent.

He didn't get far.

"The officers did an excellent job of containing our suspect, because obviously he was intent on getting out of here under any circumstances,” said Trent.

According to police, Wilbourn tried to run down officers on foot.

"At that point they did discharge their weapons towards the vehicle,” said Trent.

There was an empty wooded area behind the vehicle.

Eventually, Wilbourn gave up and he was arrested.

"Unfortunately, there were shots fired here in this parking lot, but on the other hand, this is law enforcement at work. We are doing our jobs and unfortunately this sometimes is the aftermath,” said Trent.