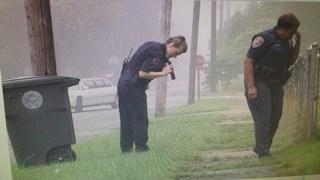 Around 5:30 a.m. Sunday morning, at least one shot was fired at a South Bend Police officer near Brookfield and Hamilton Streets, according to an officer with the department.

According to that officer, the police officer on scene was not hurt.

By 8:30 a.m., more SBPD officers were back on scene searching the area and looking for evidence.

No suspect information has been released and this is still an active investigation.