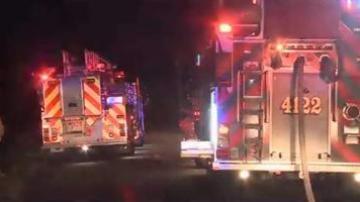 BERRIEN COUNTY, Mich. — Officers in Berrien County say that arson is to blame for a house fire on Little Paw Paw Lake Road in Coloma Township.

According to investigators, the suspect came home after having argued with his girlfriend just before 2 a.m. His parents said he was agitated when he got home and demanded they provide transportation back to his girlfriend’s house in Stevensville, Michigan.

The suspect left the home and returned with a can of gasoline, reports said.

The suspect then went into his parent’s bedroom and poured gas on the floor and furniture, reports said.

When the stepfather tried to subdue the suspect, he pulled out a lighter and ignited the fumes, reports said.

The suspect, his stepfather and mother were burned in the blaze.

Firefighters put out the fire within fifteen minutes. It was contained to the bedroom.

Scott Shriner, 34, was transported to Bronson Methodist Hospital in Kalamazoo Mi. where he remains in the burn unit with first and second degree burns to 20 percent of his body. His condition is listed as stable.

Diane Shriner, 39, was transported to and released from Lakeland - Watervliet Hospital where she was treated for first and second degree burns to her right hand.

The suspect was transported to Lakeland Regional Hospital in St. Joseph, MI. where he was treated and release for first and second degree burns to the hands and ankles.

The suspect was arrested on one count of 1st degree arson. He will be arraigned Friday afternoon.