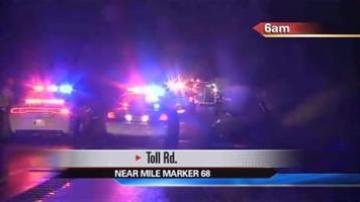 SAINT JOSEPH COUNTY, Ind. — One lane of the Indiana Toll Road was shut down in the westbound lanes after a semi vs. car accident early Tuesday morning. It has since reopened.

The accident happened just after 4 a.m. near mile marker 68 in the westbound lanes.

According to police, the semi driver tried to pass a car and lost control and hit a car. Both the semi and the car then veered into a ditch.

Police say that speed was a factor in the crash.