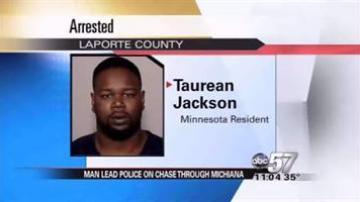 LAPORTE, Ind. -- Police in several Michiana counties tailed a man for miles on Tuesday morning.  They said the driver was swerving in and out of traffic and nearly hit a couple of school buses! The chase started in Michigan in Berrien County and ended over 55 miles later in La Porte County.

Mahmoud Mussa was on his way to work at East Side Fresh Meat and Produce on U.S. Highway 20 when he noticed traffic slowing down and he saw a swarm of police.

"He ran into the guard rail. [It is] my understanding they chased him from Three Oaks, Michigan, all the way down 39, down 20, and as he attempted to go back on 94, they had it blocked off," said Mussa, who works on U.S. 35.

Mussa said he is glad they caught the driver, Taruean Jackson.  He is also glad no one was hurt in the process, but said that is not always the case, and that police chases are dangerous for the community.

"Not that severe of a crime and an innocent bystander was killed two years ago," said Mussa.

The police captain told us Jackson's behavior was a danger to the community and the chase was the right thing for this situation.  He says after officers deployed stop stick, Jackson was only going about 40 miles per hour.  Mussa said he just hopes there are not any more police chases in the area.

"It could be handled differently, but there are times when it needs to be done," said Mussa.

Taurean Jackson is being held at the La Porte County Jail.  He is being charged with criminal recklessness, resisting law enforcement, and aggressive driving.