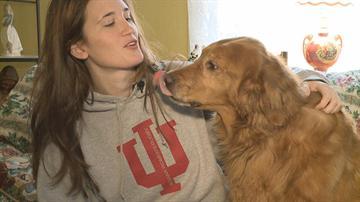 SOUTH BEND, Ind. – The O’Leary Family in South Bend is spending their holiday thankful that the early morning break-in left their family unharmed. They’ve nicknamed the family dog, Cricket, the Thanksgiving Day Heroine, and for good reason. Thanks to her bark, Katie O’Leary called 911 and police caught the suspect James Winn before he escaped.

Katie O’Leary got into South Bend late Wednesday night to visit her family for Thanksgiving. "I went to bed thinking ‘oh yeah it’s going to be Thanksgiving tomorrow’ and crazy,” said O’Leary.
She woke to strange noises in the home on Sunnymede Avenue, and the family dog, Cricket, wouldn’t stop barking.
"I was so nervous and my dog was so nervous that finally around quarter till I called 911 and told them that I think somebody is in my house that I’m not sure because I’m too afraid to leave my room,” said O’Leary.
Police dispatch stayed on the line with O’Leary until police arrived  and told her not to panic, but there was someone inside her basement.
The next thing she knew the police were chasing the suspect through the home.
"I heard somebody running up the basement stairs and I heard a thud and I think they tackled him and then they tasered him and he was screaming in pain,” said O’Leary.
As if this wasn’t a shocking enough morning for O’Leary’s family, who’s mother and sister were also home during the break-in, when police showed who the burglar was the family was shocked to recognize him.
"Somebody that knows our family broke into our house that was just so disturbing,” said O’Leary.
O’Leary said the suspect went to middle school with her older brother and had been inside their home many times.
"He’s been in this house at least dozen times at least or more,” said O’Leary.
She said the family is embracing the Thanksgiving Day spirit and feels lucky no one was hurt.
"It’s a day about family and about friends,  celebrating what you’re thankful for, I know I’m really thankful for South Bend PD and my dog,” said O’Leary
O’Leary said this is good advice to take extra time to lock your doors and windows during this holiday season.
Share this article: