Police think Aaron Hernandez may be connected to second shooting 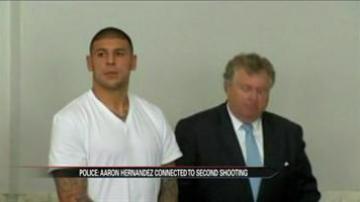 A search warrant filed in Connecticut shows that police think Aaron Hernandez may have been involved in a second deadly shooting, this one in 2012.

The former New England Patriot has pleaded not guilty to murder in connection to the shooting death of 27-year-old Odin Lloyd last year.

This new search warrant shows police think Hernandez was inside an SUV during a drive-by shooting that left two people dead.

So far no formal charges have been filed.