Police track down shooter in Mishawaka 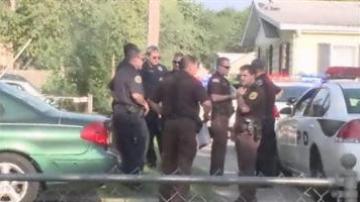 MISHAWAKA, Ind. -- Three different police departments had to track down a man in Mishawaka, after he fired two shots at another man in front of the victim’s home.

No one was hurt during the pursuit.  Police say the bullets did not hit anyone and the altercation started over a domestic dispute.

“I was watching television and I heard tires squealing and I panicked and thought maybe my dog got out,” said Milburn Blvd. neighbor Billie Nash.

Nash couldn’t believe her eyes when she went outside and saw cops everywhere.

“I walked out the door and the place was swarmed with cops in cars.  One was walking with a shotgun in his hand and one hiding behind the garage,” said Nash

County, South Bend, and Mishawaka police teamed up to track down a 32-year-old man who fired a gun at a man in front of the victim’s home on Locust Road in the County.

“One of the county officers in the area observed the vehicle heading towards the gentleman’s address.  He followed it to the home where a firearm was found in the vehicle,” said South Bend Police Sgt. Gene Eyster.

Police say that firearm was illegal.

“There was one possibly two rounds fired from the gun and the gentleman that had it did not have a permit,” said Eyster.

Neighbors were impressed with the officer’s reaction time.

“They had their guns drawn and they cam swooping in,” said neighbor Karen Hiatt.

Sgt. Eyster credits the new radio frequency with how fast the departments took down this suspect.

“We now all have access to the same radio channel, so we were in direct communication with each other,” said Sgt. Eyster.

Nash said she is happy police got the alleged shooter out of her neighborhood, so she can get back to feeling safe.

“This is normally a quiet neighborhood until lately,” said Nash.

Sgt. Eyster said the suspect will most likely be charged with criminal recklessness and possession of an illegal firearm.