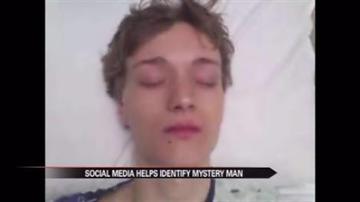 BERRIEN COUNTY, Mich. -- When officers from the Coloma Township Police Department found a young man who was wandering around unable to tell them who he was or where he was from, they turned to Facebook for help.

Lost, dazed and confused. That's how residents described 19-year-old Slobodan Rankovic when he was discovered along Boyer Road Friday morning.

"An off-duty officer received a phone call from a resident on Boyer Road near Carmady about a young man wandering through his yard, said he appeared disoriented, he wouldn't respond to any questions,” said Lieutenant Jason Roe of the Coloma Township Police Department.

"He was just kind of standing alongside of the road and kind of looking down and I couldn't tell if he had a cell phone in his hands or not,” said Boyer Road resident Linda Northrop.

With the town of Coloma at least two miles away, residents say it would be strange for anyone to be walking up and down Boyer Road."

Police say that right now Rankovic is not cooperating with them - making it difficult for them to determine what he was doing on Boyer Road - or where he belongs.

"It's not uncommon to happen, but it's pretty uncommon for somebody to refuse to identify themselves to law enforcement,” said Roe.

Police say that a lot of the credit for identifying Rankovic goes to social media.

"I would like to thank our Facebook followers for all of their concern and the shares. His mother actually found it on Facebook. She was alerted by another friend and that was a big help in this instance,” said Roe.

Rankovic was discharged from the hospital around 3:30 p.m. He is now with his mother.