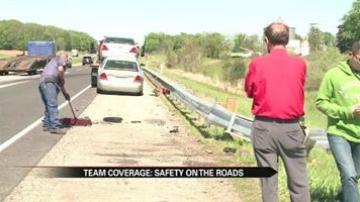 ST. JOSEPH COUNTY -- A large crash on the toll road Friday served as a reminder to drivers that taking it slow is a good idea.

“There’s no injuries at this time. I believe one of the drivers had some minor cuts on his face,” said Indiana State Police Trooper Werner.

The drivers involved in a three vehicle crash on the Indiana Toll Road Friday afternoon escaped with minor injuries.

Indiana State Police blocked off the right lane as the debris from the accident was swept away.

But it wasn’t the only close call police responded to.

Indiana State Police Corporal Chase Overbeeke said, “We have a lot more crashes, especially today. It’s been so busy the phones been ringing off of the hook.”

He said between Friday and Saturday afternoon they will see the most holiday traffic.

“You start getting cars close together at a high rate of speed and they end up crashing into each other,” Overbeeke explained.

While police said many crashes are the result of distracted driving, following too closely, and speeding, they said that’s not the biggest cause.

“Most of what we see on the highway is people falling asleep,” said Overbeeke.

So for anyone hitting the road this holiday weekend, you can add getting plenty of rest to the list of safety reminders.

It’s the best way to avoid a car crash and to make sure that the tolls are the only ticket you will have to pay.

Overbeeke said, “We’ll have numerous units out in unmarked cars, unmarked Chargers, unmarked Mustangs. Because there’s more violators out there violating the law and we’re out there.”