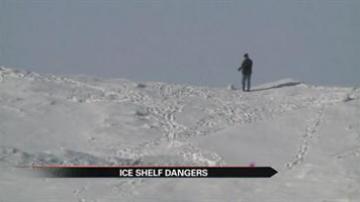 MICHIGAN CITY, Ind. -- This winter's extremely cold temperatures are icing over much of Lake Michigan. The views are breath-taking, but the area is extremely dangerous. Police are asking people to stay off the ice shelf because it could collapse.

Police say they are having trouble with people at Washington Park going out too far.

Police and the Coast Guard have received dozens of calls about people acting recklessly.

It's not illegal to go out on the ice, but it's risky - and they want people to stop taking chances.

The views near Lake Michigan are amazing this winter. The ice resembles glaciers and rises up 25-feet.

It has the attention of photographers, sledders and now police.

"They go down to the lake to see the views and they think this is safe, but it really is not," said Chris Yagelski of the Michigan City Police.

Michigan City Police are warning tourists and winter beachgoers to watch out for shelf ice after receiving dozens of complaints about people taking their children out sledding on Lake Michigan.

"Because of the way ice shelves are built, it creates pockets and those pockets can create a low-level thin ice area where people can fall through," said Yagelski.

If you fall through, you're playing the odds.

"It'd be very difficult for a rescue," said Seth Marshall of the U.S. Coast Guard.

The U.S. Coast guard in Michigan City trains for ice rescues, but even they admit help is limited.

If someone falls through, it's very difficult to pinpoint where that person is trapped. That means hypothermia could get you before help does.

"Ice on the Great Lakes is dangerous and unpredictable. Ice isn't safe at any time," said Marshall.

That's why they want you to stay back and enjoy the view from a distance.