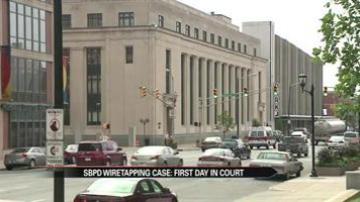 SOUTH BEND, Ind. -- Three witnesses have testified in the first day of the trial that will determine whether or not the public hears the tapes recorded at the South Bend Police Department.

The tapes have been the subject of several lawsuits, including a lawsuit by four South Bend Police officers who said their Fourth Amendment rights were violated.

At issue is whether or not it was legal for the South Bend Police Department to record phone lines of people who work in the department.

If it is legal, the public will likely hear the tapes. If the judge determines it was illegal, the tapes will never be heard.

So far, three witnesses have testified.

The first witness was Sal Parisi, who gave background information about the phone system within the police department.

He testified it is very easy to swap what phone number is associated with an office phone.

He also testified it was common for officers who were promoted to get a new office and want to take their old phone number with them.

The second witness was Diane Scott, the Assistant Director of Communications under Karen DePaepe.

Scott testified it was common knowledge that certain lines in the department were recorded and officers had cell phones to make personal calls.

She said Officer Brian Young did not know his office line was being recorded. He asked for that to stop, but no one listened or fixed it.

The third witness was former Chief of Police Tom Fautz.

Fautz testified officers wanted and even encouraged the phone lines to be recording when he was chief.

He said some lines were recorded to show they were following through and documenting complaints.

Fautz testified it was a way to become more transparent as a department.