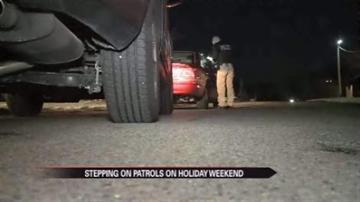 MISHAWAKA, Ind. -- St. Patrick's Day tends to be a major day for celebration in Michiana.  In fact, police say that with the combination of March Madness and St. Patrick's Day, they see more drunk drivers on the road around this time of year than on New Year's Eve.

For that reason, 7 police departments in St. Joseph County are teaming up and working overtime to keep drunk drivers off the roads through a series of sobriety checkpoints and having extra patrol cars out and about.

"We really do not want to have to arrest you, we want you to go out and enjoy the festivities, just use a designated driver." explained Lieutenant Tim Williams, Commander of the St. Joseph County Traffic Safety Partnership.

Last St. Patrick's Day there was over 30 car accidents in the state of Indiana that were caused by drunk drivers.  And police say that this weekend there have already been several DUI arrests.

"Pay for a cab because that is a lot cheaper than being arrested for drunk driving, or God forbid getting behind the wheel of that car and hitting someone." said Lieutenant Williams.

Taxi drivers in the area say they will be out in full force this weekend as well, in hopes that party goers will use them.

"You never know, sometimes its busy, sometimes it's not, but I hope so because we need money." explained cab driver Charlie Chin.

If you do go out drinking, police advise you to get at least 8 hours of sleep and eat a full meal before getting on the road the following day.  They say alcohol takes a long time to wear off.