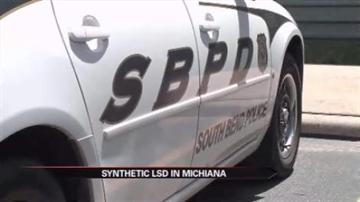 17-year-old Cody Riffett collapsed in the front yard of his Valparaiso home after taking synthetic LSD.

"If it is in the area, then chances are it is in South Bend. There is no reason to delude ourselves and pretend that it is not present,” said Captain Phil Trent of the South Bend Police Department.

Even so, it is difficult for police to track it down.

"Chemicals and formulas are altered to throw off law enforcement,” said Trent. "It does not necessarily give a positive test for law enforcement reagent test and that's the problem.”

Since there’s no way to test for the drug, it’s important to know what behaviors to look out for if you suspect someone is using synthetic LSD.

"Any weird behavior is what you would look for in a kid using LSD. Any heightened perception with anything going on around them. they may see things that are not there, they may act goofy in ways that they have not before,” said Dr. Dale Patterson.