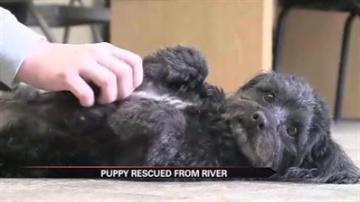 ELKHART, Ind. - A three year old poodle mix has earned her new name - Pupsicle. Like many of the animals at the Humane Society, she has been through a series of unfortunate events. Thanks to the bravery of a Humane Society officer, she has a bright future.

Pupsicle is a bouncy poodle mix that loves to play.

The 3-year-old has been at the humane society for a couple weeks, but she was just put up for adoption Wednesday.

“She had to have time to recover because of the state she was in when she came in,” said Kristina Miller, Kennel Supervisor.

Pupsicle was rescued from the Elkhart River.

A humane society officer was trying to save her when she fell into the icy water and got stuck underneath an ice shelf.

"He ended up going into the water, breaking through the ice and using a tool to grab her leg, pull her out of the ice and rescue her. She was probably in the water about 10 minutes,” said Anne Reed, Elkhart County Humane Society.

Pupsicle was non-responsive and so hypothermic her temperature didn't register on a thermometer.

They gave her warm fluids under her skin, used warm towels and a hair dryer to dry her fur.

Once she was brought up to normal temperature Pupsicle was still too weak to walk and needed several days to recover.

But after two weeks the small survivor is finally ready to find a new home.

There have already been several people who've come in interested in Pupsicle.

The Humane Society put a hold on her. It takes about 24 hours for the paperwork to process so she could have an owner on Friday.