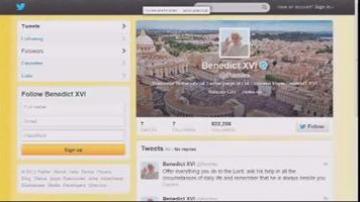 The tweet said "Dear Friends, I am pleased to get in touch with you through Twitter. Thank you for your generous response. I bless all of you from my heart."

He has tweeted several times since then.

You can follow the Pope on Twitter his name is @pontifex. That means bridge builder in Latin.