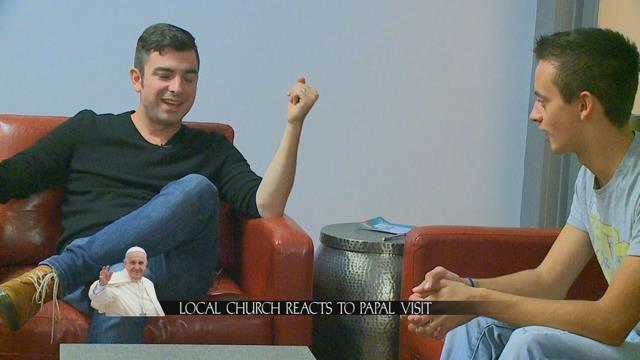 Pastor Lucas Miles has led a church for quite some time.

“I’ve been preaching for about 18 years this year. I started when i was about 17.”

As a non-denominational church, Oasis Granger doesn’t agree with all ideas of the Catholic church.

“Pope Francis, he’s challenging a lot of the traditional concepts of the Catholic church,” said Miles.

When it comes to the Pope’s progressive ideas, the world is talking.

“The pope, he’s a rock star right? I mean every body’s talking about him, there’s a lot of interest worldwide.”

He knows they’re heard far and wide, including right here in Michiana.

“Does the Pope’s decisions effect us as a local church on a day to day basis? The temptation is to say “no” because we’re not Catholic. But, in reality the influence he’s had in the media it’s shaping the worlds view of the church, Christianity, of religion,” said Miles.

So, why exactly does a Catholic pope affect a non-Catholic church?

“As a pastor, at a local level it’s something that I think we need to be aware of and that there’s a great opportunity for that conversation to continue in a local church,” said Miles.

“There’s some changes in the ways that people are thinking and I think anytime that people change the way that they’re thinking it’s going to bring up everybody involved,” said David Visser, Oasis Granger parishioner.

“There’s too many things that draw us apart and this world needs more things that will draw us together,” said Visser.

“Really at the end of the day, you know, hopefully our goal is the same, and that’s to make Jesus famous,” said Miles.