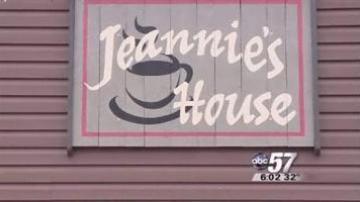 SOUTH BEND, Ind.-- For Paul Chamberlin, Jeannie's House is a part of his childhood.

"My dad graduated from John Adams High School in 1963 and I've been coming here my entire life," said Chamberlin.

Jeannie's House sits diagonally from John Adams high school and is nestled at the corner of Mishawaka Ave and Twykenham in South Bend.

However, the new owners have only been open for a short time.

Paul Rogge and his wife reopened the restaurant in August 2011 after finishing some extensive renovations.

"It was more of a traditional greasy soon diner before that and [the owners] remodeled it and upgraded the facility, the chairs and floor and everything," said Chamberlin.

Despite the change of ownership, the loyal clientele stayed.

"You know the atmosphere., the people that came in there, you could always tell the regulars because [the owners] knew their names and stuff," said Chamberlin. "[They] were turning it into something really really nice."

Rogge said his goal was to make it "homey and woodsy."

""It was kind of grueling for the first couple months for my wife," said Rogge. "She was the one who had to be here everyday. After that we managed to get a couple days off a week, and that's where we were at."

At 5:30 Tuesday morning, fire fighters responded to a call at Jeannie's House restaurant on the corner of Mishawaka Avenue and Twykenham in South Bend.

"It was pretty shocking. I didn't expect this," said Rogge.

Rogge said fire fighters were able to extinguish the flames quickly, saving part of the building.

"They did a great job. They got it out pretty fast and I mean, it's not that bad. We can rebuild," said Rogge.

The loyal customers at Jeannie's were also shocked to hear about the fire.

"When I came by I saw the tape and the news cameras and I thought, 'Oh my! We don't need this in this neighborhood," said Chamberlin. "[They] were building something where a lot of places have been closing."

Rogge said the loyal customers have been the best part of the business.

"It's been great. We've met a lot of new people, made friends. My wife's been ecstatic. Very happy with everything. This is just a minor set back. We'll be back."

Rogge said he hopes to get the go ahead from the insurance company and be back in business by spring.