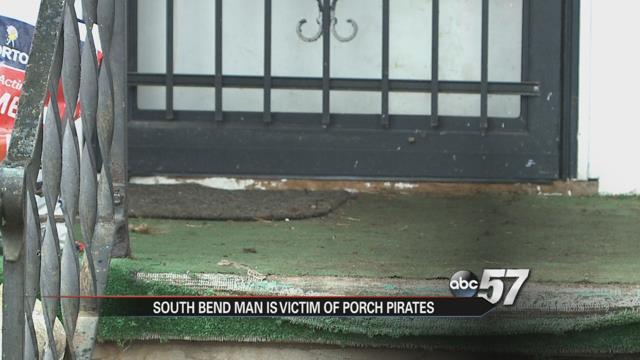 It is season for online shopping and gift giving but also a season where thieves could be at work to steal your purchases.

A South Bend man had his gift stolen right from his front porch. “We do a lot of online shopping and stuff gets sent here. It always ends up here on the front porch, never had anything stolen,” said Justin Wells.

Wells has lived in the River Park Neighborhood for about ten years and had never had this happen to him before.

“We ordered a gift online and had it shipped here to the house, within moments of it being delivered, it had been stolen,” he added.

According to his FedEx tracking information, the package was delivered at 1:50 p.m. on December 3rd. He had left home to pick his children up from school at about 2:15 p.m. and when he came back the package was gone.

He said within the past couple weeks, he has known of others in his neighborhood who have had packages stolen.

Now that this has happened, he plans to install surveillance cameras around his home as well as use alternate shipping methods.

“Get insurance on anything you have shipped to your house. Always require a signature before it gets delivered and when that’s not available, have it shipped to that company’s office. If available have it shipped to where you work. I used to do that in the past and that was awesome because I knew it was going to be safe,” he said.

With FedEx, people can enter information and have the option of a package being delivered at a specific time.