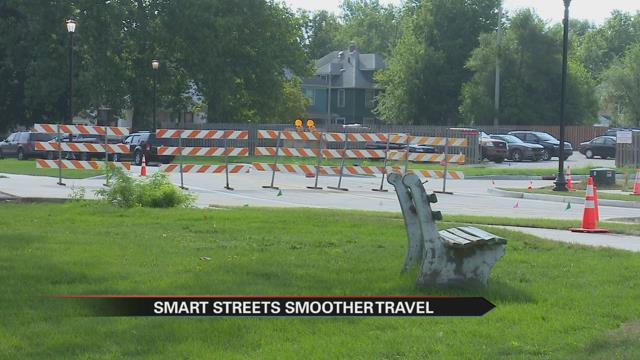 Drivers will be able to travel on three new roundabouts.

Portions of Michigan Street and Main Street will also open as two-way.

Tom Gooley, owner of Brad’s Pro Shop off Chippewa Avenue, says he’s happy the construction is coming to an end.

“We will be thrilled, and hopefully it does improve traffic flow, and it’s better for the city. We’ll definitely be happy when it’s finished,” Gooley said.

Since construction started in May, delays or detours have plagued drivers all over the city.

The roundabouts on Michigan, at Bartlett and Marion will allow two-way traffic between them.

The roundabout at Chippewa and Michigan will also open, and traffic heading north from Chippewa on Michigan and Main will open as two-way until Ewing.

Downtown construction will be completed in phases.

“The downtown area is going to get the bulk of the streetscape improvements, so we’re seeing new curbs, sidewalks, lighting, landscaping and that takes time,” Jatin Kain, deputy director of South Bend Public Works said.

Kain says the goal is to make the converted streets accessible for both drivers and pedestrians.

“The idea is to ensure that all modes of transportation have equal access to the road as a public space,” Kain said.

The sections of Michigan and Main between Ewing and Sample are expected to be completed by September 19.

The final downtown stretch is set to be completed by November, but construction will halt during Notre Dame home games.

Kain says although there may be growing pains with the new streets, all the construction will pay off for travelers and businesses.

“Businesses have much more visibility in a two way condition because now you can notice businesses coming both ways.” Kain said.

Gooley says that’s what he hopes happens for his shop.

“It will be a little less congestion and it will be easier for people to get here that aren’t normally familiar with the area,” Gooley said.