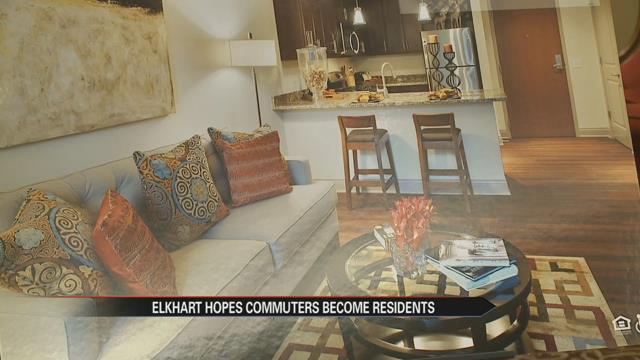 On Thursday officials announced that a $25 million luxury apartment and retail space could be developed right off the river walk.

The project aims to attract and retain tens of thousands who work in Elkhart County but choose not to live there.

According to the Indiana Business Research Center at Indiana University's Kelley School of Business, in 2013 there were 28,041 people who commuted in and out of Elkhart County for work.

“We believe this will absolutely happen we need it in Elkhart we need this type of housing," says Dick Moore, Mayor of Elkhart.

Moore has hope rather than certainty for the project because an actual purchase agreement has not been drawn up.

That’s an issue that Mary Olson, city council member at-large, had to bring up.

“I live in the real world and I need to know the dollars and cents,” says Olson.

Leaders say the majority of the project will be funded by the developers. Some money will come from tax dollars but an exact figure was not announced.

Developers do know who they think will be renting these luxury units.

Flaherty estimates average income for residents to be around $75,000.

“These units will be the most expensive available in Elkhart so it tends to attract more of a professional individual within the organization. There will be some that are older that are retired,” added Flaherty.

Steve Gruber, a landlord in downtown Elkhart, also attended the meeting and explained the housing demand he has experienced.

“We will have a vacancy December 1st and I have two people that I am going to think about. It’s nice that I’m not desperate," says Gruber.

Gruber rents out three apartments off Main Street and says they are always full of people.

“They are all under 40, all college graduates, and professional. When you look at professional people we don’t have a big white collar sector,” says Gruber.

This kind of environment that Gruber describes shows him that some people do want to live near the Gate Way Mile, but it is a matter of who can afford it?

“I am cautiously optimistic,” says Gruber.

Brian Prince, lead developer of the project, says if all the necessary steps are approved through the city and a purchase agreement is made the developers hope to break ground by spring of 2016.