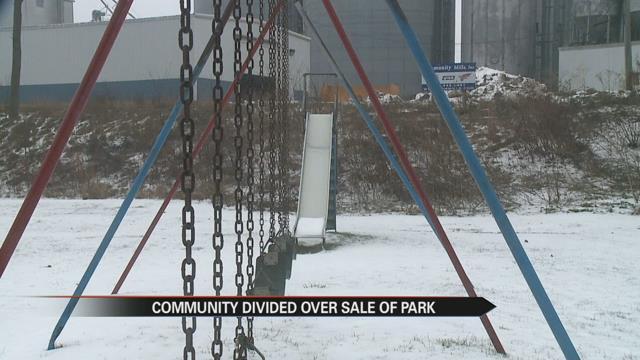 A Cassopolis community is divided over a park.

Southside Park in Cassopolis Village might be sold to a local business for $15,000.

“I think it’s a sad day to think that they want to just get rid of the park,” Cassopolis Village resident William Curry said.

The small park is the only of its kind in the south side of Cassopolis Village, and it’s been there since the 1980s.

Selling the park was not on the Cassopolis Village Council’s agenda until recently.

“We have been approached by the neighboring, adjacent property owner that they would like to make an offer on [the park],” Cassopolis Village Council President Dianna McGrew said.

“The council is considering accepting their offer,” McGrew said. “And we will look for a different park, maybe in a safer place.”

But Curry, who has lived near the park for the last 32 years, disagrees.

And he said it’s well-used by the south side community, which is opposite a new, and bigger, park called Clisbee Park.

“Having lived here for as long as I have, I know how much [Southside Park] gets used,” Curry said.

The Hunt family, who live up the street from Southside Park, also enjoy it.

“I think we should keep it,” Tyler Hunt said.

“In the summer, we go down there all the time,” Tyler’s brother, Fonzo Hunt, said.

And the Hunt family said they would like to see Southside Park be improved, though Lisa Hunt, the boys’ mother, has one condition.

“If they’re not gonna fix the park up, then I agree 100 percent with Community Mills to go ahead down there and make an improvement in our community,” Hunt said. But she added she’d prefer the park be redone and stays where it is.

Curry said if the village council really wanted to improve the park, they would’ve done it before opting to sell it.

The basketball court is prone to flooding, the playground equipment is old and the pavilion is in need of some roof repairs.

Despite these flaws, residents said the park is often used by Southside neighbors.

Some residents added that having a park on the south side of town is not only a treat for local children, but it’s also safe and convenient because it keeps children from having to travel across town to play at a park.

“[McGrew] is asking everybody to travel from the southern end down here – the little kids, 7, 8, 9-years-old – to walk all the way uptown and go across town to the other end,” Curry said. “I disagree with that.”

“Clisbee Park has a lot more,” Lisa Hunt said. “But if they can have a park like Clisbee down this way, it would be more of an advantage for our kids down here.”

If the park is sold, McGrew said the village council would work with south side residents to develop a new park somewhere in their part of town, though a location has yet to be determined.

A manager at Community Mills said he could not comment until he spoke with the company’s owners.

The vote to sell Southside Park will take place at the next Cassopolis Village Council meeting, which is on Monday, January 11 at 7 p.m. All residents are welcome to attend.

Additional information not included in the videos:

McGrew said the $15,000 Community Mills would pay for Southside Park would not be enough to cover the costs of a new park, but the village council would have the option to utilize parks and recreations funds to make up the difference.

McGrew also said that the owner of Community Mills assured her that, “He’s going to keep [the land] mowed and nicely maintained because it is one of our gateways into the village.” But McGrew added that she does not know what Community Mills has planned for the land beyond maintaining it.

McGrew encouraged south side residents to use the other parks in the village until a new park is built in their neighborhood.

“They won’t have long that they will be without something to take their kids to [in the south side],” McGrew said. But Lisa Hunt said among a number of problems not having Southside Park poses,  the fact that two of her children have asthma means walking across town to play at Clisbee Park is troublesome.

Curry said the flooding that occurs on the Southside Park basketball court is because of water runoff from Community Mills’ property, but a manager said that problem had been taken care of.