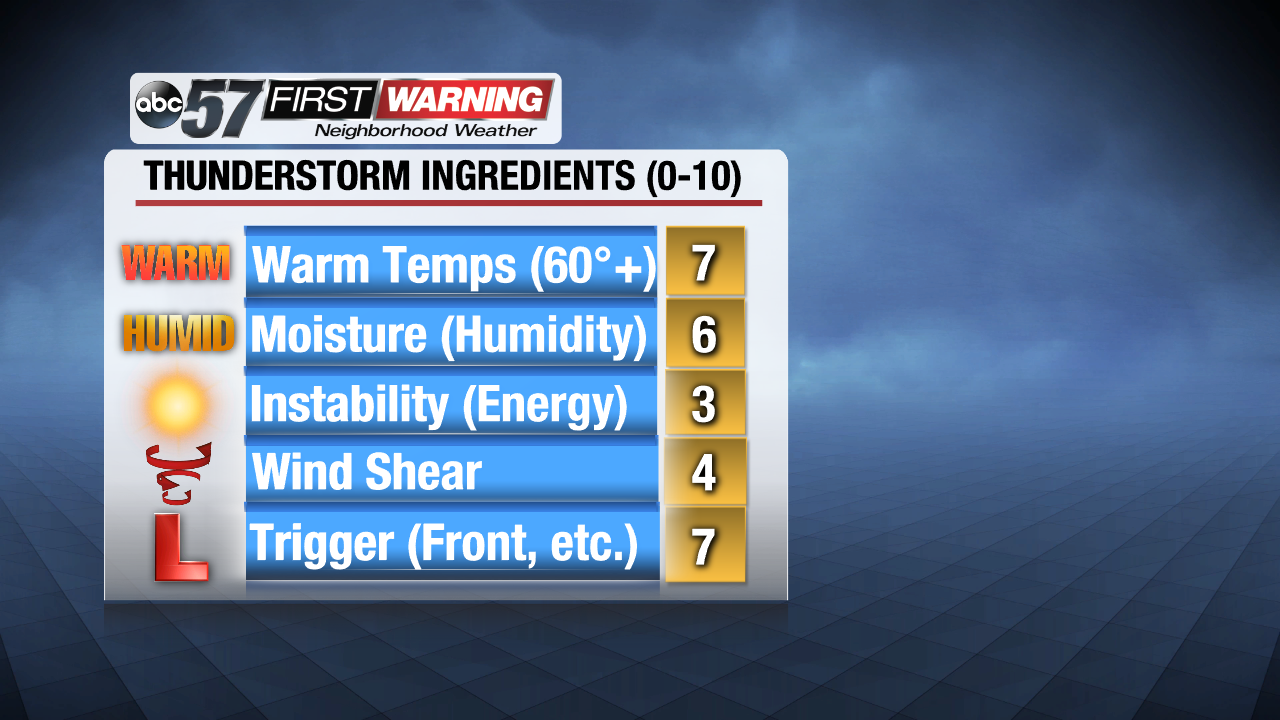 Ingredients necessary for thunderstorms and how much they will each be present in Michiana on a scale from 0 to 10 Friday and Saturday.
It hasn't happened often in 2018 thus far, but a potent spring storm system will traverse the Lower 48 Thursday through Sunday. It will bring a potpourri of weather, ranging from blizzard-like conditions across the far northern states to severe weather across parts of the Plains and Tennessee Valley. Yes, this system will impact Michiana and the Great Lakes, but it looks as though the worst of the threatening weather will stay to our west and southwest.

When forecasting the potential for thunderstorms and severe weather, meteorologists analyze a number of variables. Ingredients like warm temperatures, available moisture, instability, wind shear, and whether or not a front is moving through are the big ones. For Michiana, each of those components will be present to some degree. Most of the area will have sufficient warmth and moisture in place to support the chance of thunderstorms. Instability and wind shear are less impressive, but thunderstorm development is still more than possible when those variables are minimal. 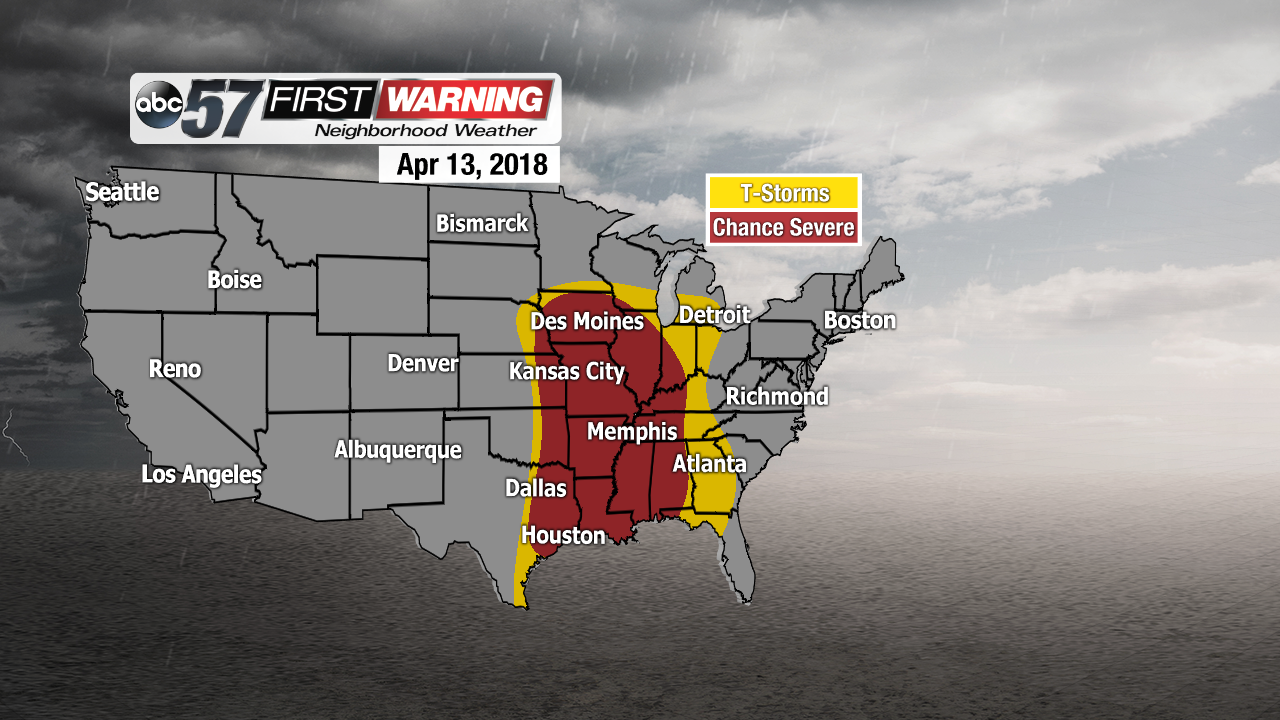 Thunderstorm threat April 13-14 for the United States
Areas in which instability and wind shear are much more significant include states like Iowa, Missouri, Illinois, Arkansas, Mississippi, Louisiana, and Texas. When higher values of instability and shear are in place, the threat for not only thunderstorms increases, but severe weather as well. As a result, the severe risk area does not include Michiana. Rather, it exists just to the west and southwest of the region. As of Tuesday evening, the states with the "highest" severe weather threat are eastern Texas and Oklahoma into Arkansas and southern Missouri. Those states are highlighted in a severe threat by the Storm Prediction Center. 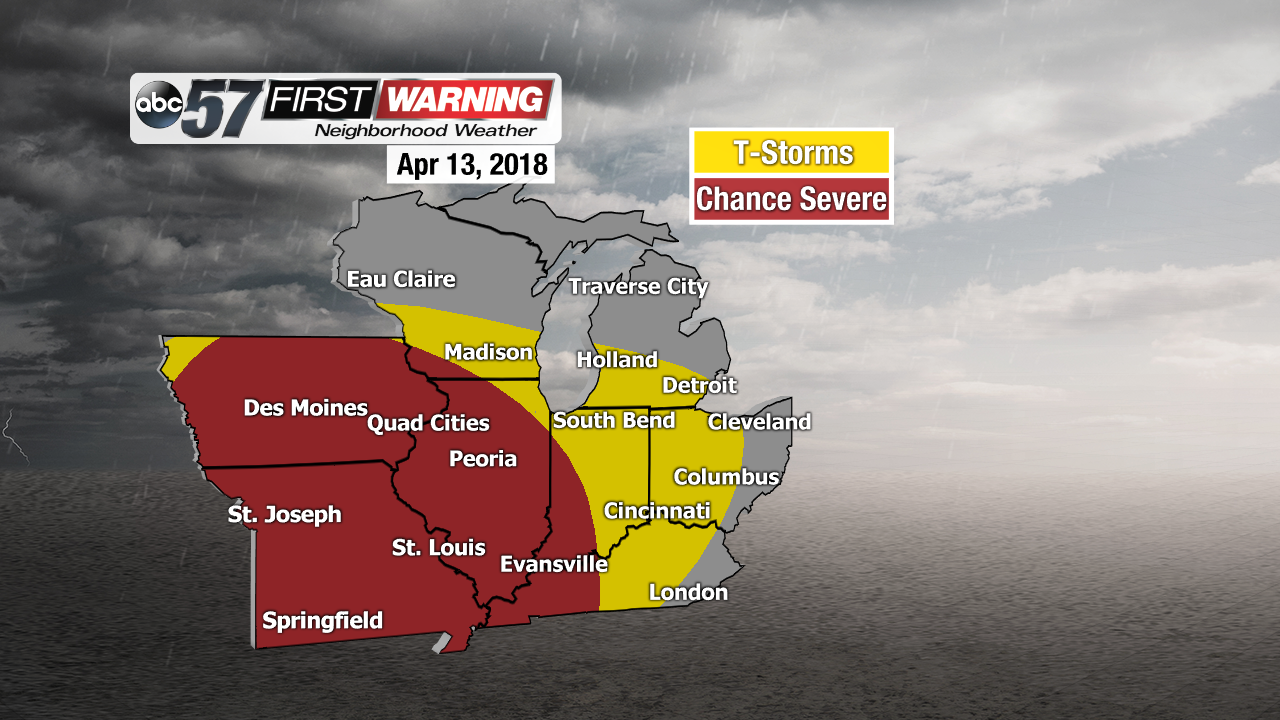 The last noteworthy component meteorologists look for when analyzing the threat for thunderstorms and severe weather is what is referred to as a "trigger." In other words, something that can ignite and support the development of thunderstorms. Most often, triggers are either cold fronts, warm fronts, lake breezes, thunderstorm outflow boundaries, or areas of low pressure. While a strong area of low pressure and an associated potent cold front will be present across the Plains and Mississippi Valley regions, they both look to weaken a bit as they approach Indiana and Michigan. As a result, the trigger is not as impressive as it will be to the west and southwest. Nonetheless, enough lift associated with the front and area of low pressure should be present to support a minor threat for at least some thunder and lightning, and perhaps some small hail across Michiana Friday and Saturday.