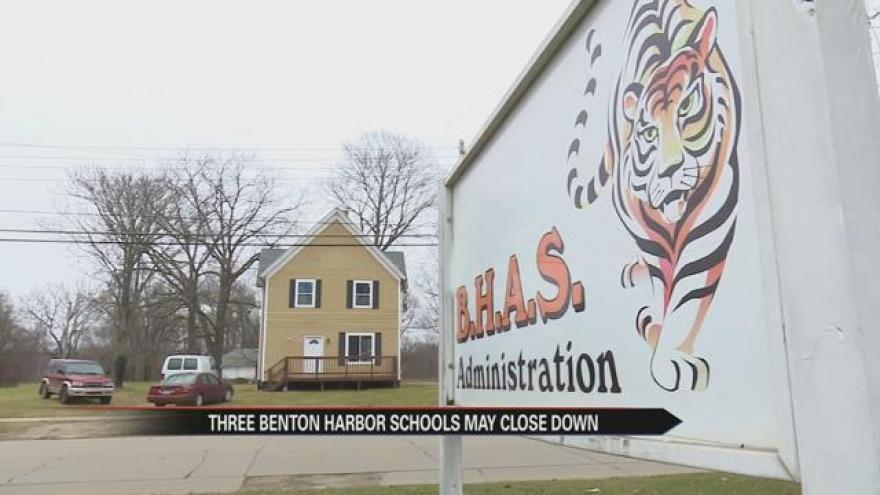 Despite feeling hopeful she can keep them open, Benton Harbor Area Schools superintendent says potential school closings could lead to the end of the district.

“I’m not panicked at all,” Benton Harbor Area Schools Superintendent Dr. Shelly Walker said. “I haven’t been since Friday because I believe in what we’ve done.”

Walker could lose three of the six schools in her district after a letter sent to families from the state’s school reform office last Friday said they are consistently low performing.

The International Academy at Hull, Dream Academy and MLK S.T.E.A.M. are being reviewed by the reform office because they’ve ranked in the lowest 5-percent of Michigan schools for at least three years in a row.

“We have a lot of work to do, but we are seeing improvement,” Walker said.

Walker is hoping a list of improvements made since she took over last February – including a new intervention program for students, the purchasing of new curriculum materials for teachers, and professional development courses for faculty – will convince the state to keep those schools open, and nurture new potential.

“I believe that the school reform office would be hard-pressed to not see that growth and not decide this is not good for Benton Harbor Area Schools and their community to shut down these schools,” she said. “This is a new day with new leadership, new focus, new curriculum, new goals, etc.”

Elaine Edmondson has a nephew or niece in each of the three at-risk schools.

“They need to keep the schools open,” she said. “Our kids need to learn. We need more schools to open up cause they’re being too crowded in the classrooms.”

The reform office will decide by March if the schools will stay open, after conducting a review and hearing a pitch from Walker.

If the answer is no, the schools will close at the end of the 2017 school year.

When asked if, in the worst case scenario, the three schools are closed, would the district be able to move forward as just a middle school and a high school, Walker said:

“You know, I don’t have a crystal ball. I wish I did. But my theory would be no.”

She hopes the reform office will take into account that standardized test scores from 2014, 2015, and 2016 were used to determine the current rankings, but those scores came out before all the improvements were made to the district.

In the meantime, she has this advice for you at home.

“Stay calm and trust in what we are doing,” Walker said. “It is the right work, I am convinced of that. And I believe it will evidence itself to the reform office and they won’t close our schools. That is what I am believing.”

The first will take place at 7 p.m. on Wednesday, January 25 at Benton Harbor High School.

(Note: In the video above, the location for the town hall on Wednesday, January 25 is incorrect. The correct location is Benton Harbor High School.)

Benton Harbor Mayor Marcus Muhammad will also be holding a town hall to address concerns about the schools.