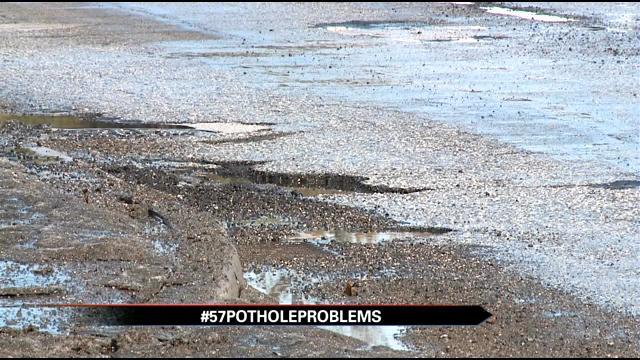 Potholes across Michiana are causing problems and costing money.

In some cases, drivers are paying more than $1000 to fix their vehicles after driving into of those holes.

“It's terrible out on State Road 23 by the mall. Like when I drive over there with my car, it's like I'm driving over stuff I don't want to drive over. It's terrible,” driver Zach Cashmen said.

“I swerve or I slow down. Or I somehow manage to get around them,” Susan Snyder said.

But some drivers end up at Zolman Tire on McKinley Avenue in Mishawaka.

“Yep it is pothole season. We have been seeing a lot of people in here for bent wheels,” Josh Smith of Zolman Tire said.

Cracked wheels, leaking tires, and loose parts are just a few other issues they are seeing.

Wednesday afternoon the team spent the day working to fix a cars alignment.

It is yet another consequence that can result from hitting just one of these potholes.

“I ran into potholes and blew out a couple tires due to potholes so this year I'm very careful to avoid them,” Snyder said.

The bigger the wheel. The more expensive.

And if a pothole damages front end parts of the vehicle, the price goes up even higher.

“It could range anywhere from $200 to $1000. Just really depends on what kind of vehicle and what was damaged when they hit a pothole,” said Smith.

Experts warn drivers to get their vehicle checked immediately after hitting a pothole.