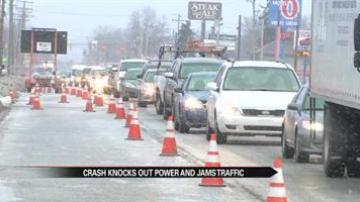 SOUTH BEND, Ind. -- Tuesday morning hundreds of drivers were stuck in traffic after a car smashed into a pole in South Bend at 933 and Cleveland. Repairs forced crews to shut off power to the area, including the traffic light and area businesses.

Crews had to replace the pole the vehicle hit late Monday night.

"It really stinks, but I guess there's nothing you can do," said Heather Bennett of Dunkin Donuts.

Traffic was backed up for as far as you could see. It even forced the Dunkin Donuts to close.

"This happened to us before with the bad weather. Had to close for a couple days. It was terrible with the emergency closing and now this," said Bennett.

Starbucks and Steak 'n Shake and several other businesses had to close.

One employee from Jimmie Johns says he heard the crash and rushed outside right away.

"We heard it, kind of ran to the door and saw a red car crash into a pole," said Neal Garvey of Jimmie Johns.

Although drivers were frustrated, they treated the intersection as a four-way stop and got through without any problems.

According to police, one person was hurt but refused medical treatment.

Police are still investigating the cause of the crash.