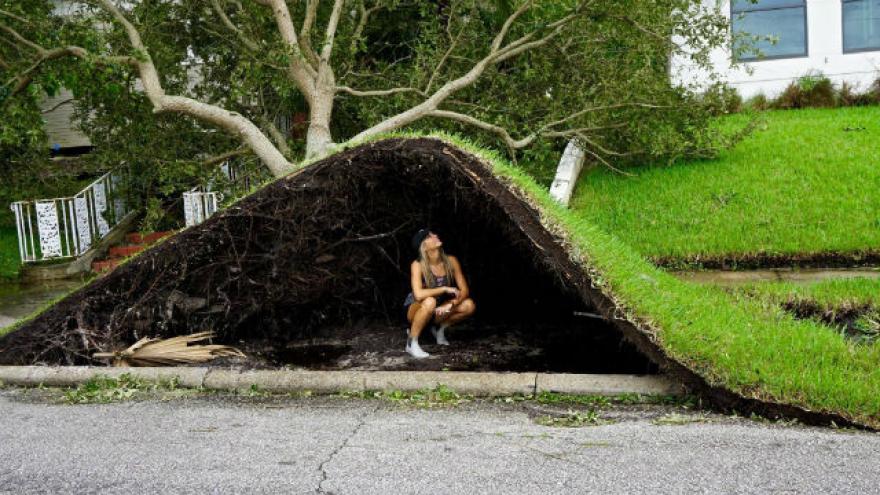 A woman takes cover under a lawn in Tampa after it was ripped up after Hurricane Irma blew through the area. Photo courtesy Skie RW (IG: @jssca_skie) 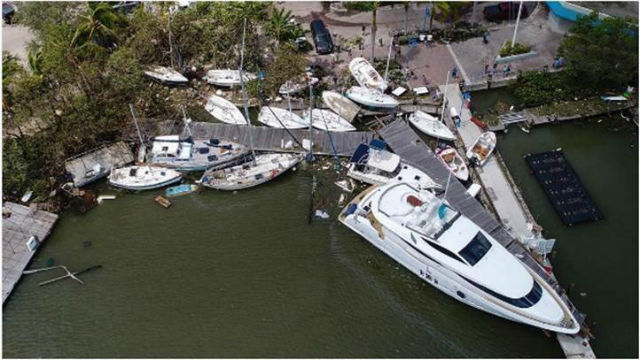 An aerial image of Coconut Grove in Miami after Hurricane Irma. @emilliyo/Instagram

(CNN) -- Philip Dennen, a Korean War vet who safely rode out Hurricane Irma with his wife in their boarded up Florida home in Sarasota, now worries about the loss of electricity needed for his oxygen supply.

"I don't like to think about that," he said of the prospect of an extended outage. "I have enough bottled oxygen to last several days. We have enough gasoline to get out of the car to run the generator probably for several days, but without power, we'll be in a little trouble."

Floridians who weathered the historic storm must now cope with an unprecedented loss of power: About 15 million people were without electricity across the state, the Department of Homeland Security said Tuesday. The state later said 4.4 million customers were without power.

"It's been a lovely life but I'm not ready to leave it yet," Dennen quipped this week. "I'll be 92 next month. I think I might have another couple of years."

Large swath of Southeast left in the dark

Dennen is among the millions throughout much of the Southeast unable to perform simple tasks such as switching on the lights or setting the air conditioner on high in the post-storm humidity.

In Georgia, about 700,000 customers -- which includes households and businesses -- were in the dark Tuesday, according to Georgia Power and Georgia EMC. That's down from 1.5 million the day earlier.

In South Carolina, about 55,000 customers were without power, according to Duke Energy and SCE&G.

In North Carolina, more than 29,000 customers didn't have electricity, according to Duke Energy.

And in Alabama, about 7,000 customers remained without electricity, Alabama Power said.

"Power pretty much drives everything," said Christopher Krebs, assistant secretary for infrastructure protection at the Department of Homeland Security. "Lights are out. There may be impacts on local water and waste water treatment facilities."

Floridians are beginning to get a sense of how long they'll be in the dark.

Customers who lost electricity on the eastern side of the state will likely have power restored by the end of this weekend, Florida Power & Light said.

But those on the west coast of Florida -- where Irma made its final landfall -- are not likely to have power restored until September 22.

"This is going to take some time to restore and, in some circumstances, it will be a situation about rebuilding," Krebs said.

Electrical help from US and Canada

Gov. Rick Scott said 30,000 workers from out of state are assisting efforts to bring back power to nearly 5 million customers.

Help is coming from as far away as Canada. Nova Scotia Power tweeted that it was sending 23 employees to Tampa for assist with restoration efforts.

He returned home for a few hours last week to see his daughter and get some laundry done before heading to Florida.

"You're sacrificing a lot," he said by phone from Florida. "My first child should be a month old in four days and I've been gone for three and half weeks. I know it's definitely hard on her mother."

In Texas, he said, storm victims assisted crews with trucks and machinery. In Florida, residents offer them drinks and snacks.

"A lot of times, we come on these storms and people get really hostile as far as not really understanding why we can't just flip a light switch and make everything come back on," Parker said.

Initial estimates are that 25% of homes in the Florida Keys have been destroyed, the Federal Emergency Management Agency said. Another 65% suffered major damage.

Now a tropical depression, Irma is still expected to bring torrential rainfall as far north as North Carolina. At least eight storm-related deaths have been reported, according to local officials:

In Sarasota, Steve and Laura Brady, their daughter Peyton and their two dogs returned from a shelter Monday to find their home largely intact.

"Right now, being our house is fine, this is probably the hardest part," Steve Brady said of the power outage. "I would say once the power goes back on, we got off pretty easy."

Brady said some food in the refrigerator may go bad, but the family had other things to eat -- and neighbors with generators.

"I'm betting the power being out is Peyton's worst fear. No WiFi," Steve Brady said.

"I don't like the dark," his daughter chimed in.

The family will consider staying with relatives in other parts of the state if power isn't back in a couple of days.

"I couldn't imagine coming home and having my house under water," Laura Brady said. "The minor damage we sustained. I just can't imagine what some of those other people go through."

Dennen, the Korean War vet, said he's counting on his small generator and the kindness of neighbors to get by. Irma was his third hurricane.

Dennen and his wife Beverly will use kerosene lamps and flashlights to read and a propane burner to cook and heat tea.

"We could make it for a week without too much trouble," he said.