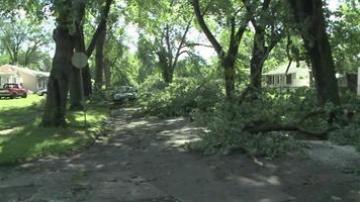 SOUTH BEND, Ind. -- Many customers of Indiana Michigan Power and Midwest Energy Cooperative are still without power Tuesday evening. After such damaging storms, getting power back on is no easy task.

The storms that rolled through Monday night and Tuesday morning caused trees to fall on the ground and on power lines. Some streets were blocked by trees or large limbs.

"Everybody is physically fine. Mentally, they're pretty well tore up," said Bootsie Grant of the Keller Park Neighborhood Association.

Grant is just one of 60,000 people in Michiana without power. Her Keller Park neighborhood was one of the worst hit areas in the city

Utility crews are assessing and repairing damage done by the storm.

Workers with Indiana-Michigan Power found more than 60 broken poles, dozens of cracked cross arms and several transformers that need to be replaced.

"This is something that could last a couple of days," said Tracy Warner of Indiana-Michigan Power.

Warner says a storm of this magnitude requires all hands on deck, but crews must first evaluate the damage before making any repairs.

But soon they'll be replacing lines and fixing beams.

"Damage like this is just beyond our control. What we do is we try to get the power back on as efficiently and quickly as we safely can," said Warner.

Which is good for some, but bad for others.

"We have a gentleman with an oxygen tank. We don't know if he's going to be able to make it through the day," said Grant.

Indiana-Michigan Power de-energized wires they considered a safety hazard. They don't have an estimate for full restoration, but say rural customers will have to wait the longest.

As of 4:30 Tuesday, 5800 Midwest Energy members are without power. Most crews will be working until 10 p.m. Tuesday, then will take a break. Two crews will work overnight. Crews will resume work at 6 a.m. Wednesday. Officials say service will be restored by Friday.