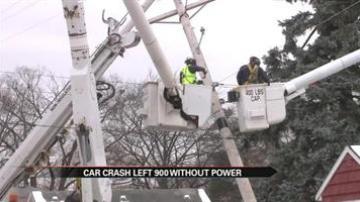 SOUTH BEND, Ind. -- A vehicle crashed into a tree and a power pole and knocked out power to almost 1,000 residents of River Park in South Bend Monday as the temperatures dipped into the 20s. The power was restored around 3 p.m.

South Bend Police say the 45-year-old driver blacked out behind the wheel, hit a tree and then knocked down the power line at 32nd and Pleasant streets around 10 a.m.

Police say the driver complained of chest pain and had difficulty breathing.

He was taken to the hospital with non-life threatening injuries.

Indiana Michigan Power came out immediately to replace the pole-but first they had to shut the main transformer off, which left nearly 1,000 people without power.

Residents said it got very chilly inside their homes, but they're glad no one got hurt.