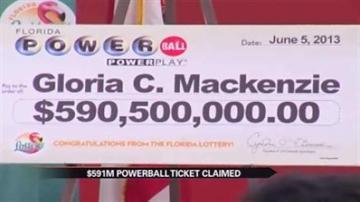 McKenzie is from Zephyrhills, Florida where that ticket was sold.

She did not speak to reporters Wednesday but released a statement instead.

"While in line at Publix, another lottery player was kind enough to let me go ahead of them in line to purchase the winning quick pick ticket. We are grateful for this blessing," said McKenzie in the statement.

She has chosen to take the nearly $591-million jackpot in a lump sum. That is about $371-million after taxes.