Powerful Iran-Iraq earthquake is deadliest of 2017 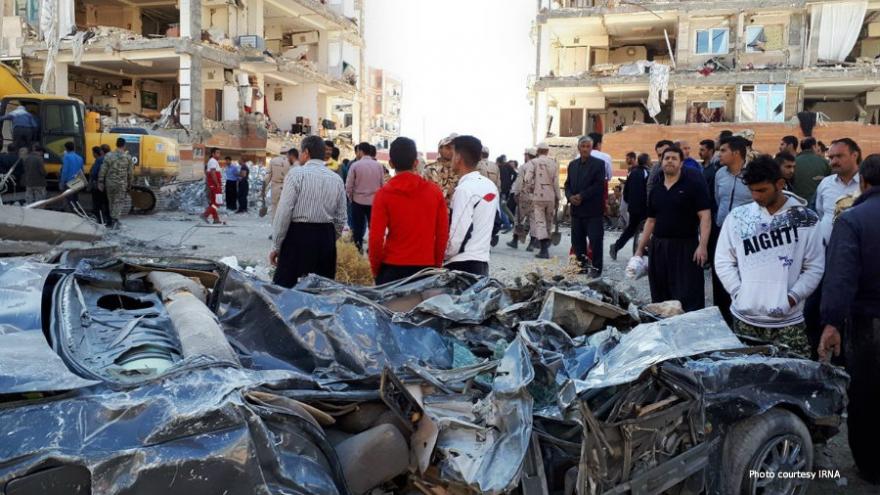 (CNN) -- At least 452 people were killed and thousands injured after a powerful earthquake struck near the border of Iran and Iraq late Sunday.

The earthquake is the deadliest of the year, eclipsing the one that hit Mexico City in September, and was felt as far away as Turkey and Pakistan.

Around 100 of the dead are believed to be from one town in Iran's Kermanshah province, the country's semi-official Mehr news agency reported.

In response to an outpouring of sympathy and offers to help, Iranian Foreign Minister Javad Zarif issued the following statement on Monday:

"Heartbreaking images from the earthquake damage and loss of life in Kermanshah (and in Iraq). We are grateful for global expressions of sympathy and offers of assistance. For now, we can manage with our own resources. Many thanks for all offers and we will keep you posted."

The earthquake hit late Sunday night with the epicenter in a rural area on the Iranian side of the border, just south of the Iraqi city of Halabja, according to the US Geological Survey, which tracks earthquake activity around the world.

The quake was at a depth of 23 km (just over 14 miles), which is considered shallow, according to the survey. It was felt across the region with aftershocks hitting Pakistan, Lebanon, Kuwait and Turkey, news agencies in those countries reported.

Iraq's Meteorological Organization issued a warning on Iraqi state TV urging citizens to stay away from buildings and to refrain from using elevators.

Iranian President Hassan Rouhani planned to travel to Kermanshah to oversee rescue work on Tuesday, Iranian state TV reported. The country's interior and health ministers are already there to supervise the rescue operations, it said.

Iraqi Prime Minister Haider al-Abadi tweeted Monday that he "instructed civil defense teams and health and aid agencies to do all that they can to provide assistance" to those affected by the quake.

Meanwhile in Iran, the country's Supreme Leader Ayatollah Ali Khamenei sent a message of condolence and urged military and civilian help to be dispatched to quake victims.

Iran's Revolutionary Guard was reportedly traveling to the affected areas to help with rescue efforts, according to Iran's semi-official Tasnim news agency.

In Iraq's semi-autonomous Kurdish region, four people were killed in Darbandikhan, where a dam was hit by falling rocks. Rahman Shikhani, the head of the Darbandikhan Dam, told CNN that cracks were spotted in the upper part of the structure but there was no water leakage.

Meanwhile hundreds of people were injured in the region, though most of these were minor injuries, said Rasheed, the health minister.

Majida Ameer, who lives in the south of Baghdad, said she ran to the streets with her three children after the quake hit late Sunday.

"I was sitting with my kids having dinner and suddenly the building was just dancing in the air," Ameer told Reuters.

"I thought at first that it was a huge bomb. But then I heard everyone around me screaming: 'Earthquake!'"

Pourya Badrkhani, a music teacher in Kermanshah, Iran, told CNN he was sitting at home watching television when the quake hit.

Badrkhani said he rushed out of his home along with his family and joined neighbors on the streets.

He said people were donating blood to help the injured while others have volunteered to go and help the border cities, which he says were the worst affected.

Iran sits on a major fault line between the Arabian and Eurasian plates and has experienced a number of earthquakes in the past.

The deadliest this century occurred in 2003 when a magnitude 6.6 earthquake struck the southeastern city of Bam, killing some 26,000 people.

Over a decade earlier, in June 1990, an estimated 37,000 people were killed and the northern cities of Rudbar, Manjil, and Lushan were destroyed along with hundreds of villages.