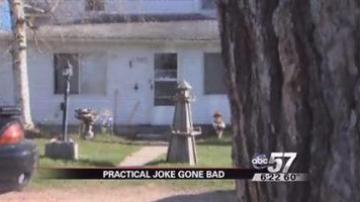 FREMONT, Mich. -- A Michigan couple tried pulling a practical joke and ended up surrounded by cops!

Get this -- a Fremont man and his girlfriend had family coming to town. As a prank, they decided to grab some ketchup, snip a few holes in a shirt, and added some mushrooms for fake flesh. It was the perfect recipe for a make-believe murder!

Only no one was laughing!

"We just tried to pull a hoax on him. When they seen me -- they were gone. They headed for the door. Called the police. They were scared. They still thought it was for real. Yeah, I feel bad," said the practical joker.

Police from four different departments and a SWAT Team responded.

Right now, the County Prosecutor is reviewing the case.