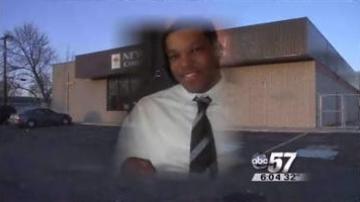 There was an assembly on Monday for Chris at Washington High School. Students prayed and talked about what happened to him. But before that, early this morning, another prayer service was held at New Generations Ministries, on South Bend’s west side.

Inside of this church, confused and shocked, friends and family of Chris Simril gathered to say goodbye.

"Everyone was really upset about it. Everyone has the same reaction. They didn't know why this would happen to someone like Chris,” said Angelina Hernandez, a Washington High School student and friend.

Someone who friends say was college-bound with good grades and without a known enemy. These photos, we're told, sum up Chris -- a young, happy teen, always showing his infectious smile.

"I want Chris to be remembered for his heart and how kind he was to everybody, no matter who you were,” said Danyeal Mcintosh, another Washington High School senior and friend.

The pastor here at New Generations Christian Ministries, prayed with Chris' mother this morning. As he held her hand, he said she appeared dazed.

"She didn't say very much. She seemed like she was pretty numb,” said Pastor Calvin Macon of New Generations Ministries. "It was like she didn't really think this was happening to her."

She remembers that daunting knock on her door at 8 p.m. on Sunday evening when police told her that Chris was dead.

Here is a look at the scene on West Ewing Street, around 6:30 p.m. at Walkerfield Park.

Flashing lights lit up the block. Friends said that Chris' smile lit up their lives.

"Chris was always a good person. Whoever did this to him, I know God will make them pay for it,” said Chris Williams, another friend.

His mother says he'll be laid to rest in St. Louis, where their family is originally from.